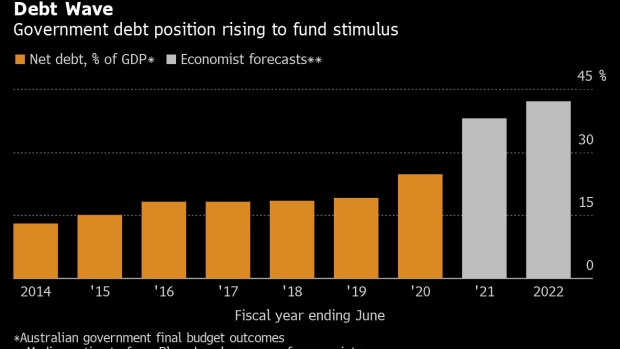 Gold scales are displayed in the foyer of the Reserve Bank of Australia (RBA) building during a partial lockdown imposed due to the coronavirus, in Sydney, Australia, on Monday, May 18, 2020. Australia’s central bank decided against buying government bonds last week, the first time that’s happened since it began a quantative easing program in late March that sought to hold down three-year yields in order to lower interest rates across the economy. Photographer: David Gray/Bloomberg , Bloomberg

(Bloomberg) -- Australia’s central bank is expected to keep its powder dry for another month as it clears the airwaves and commentary pages for the government’s anti-recession fiscal program in Tuesday’s budget.

The Reserve Bank of Australia is forecast to keep interest rates and its three-year yield target unchanged at 0.25% on Tuesday, which will also mark four years of Philip Lowe at the helm of the central bank. While a number of economists predict an easing of policy, the balance see the board waiting until November. Markets expect no change.

The central bank is keeping borrowing costs low across the economy via its bond-buying and bank-lending programs. RBA No. 2 Guy Debelle last month set out potential additional options: including taking the cash rate to 0.10%, buying longer-dated government bonds, currency intervention and negative rates. Policy makers played down the likelihood of the latter two options.

“The RBA’s easing bias and ongoing work behind the scenes on other policy options is clear,” said Su-Lin Ong, head of Australian economic and fixed-income strategy at the Royal Bank of Canada. “By continuing to highlight other policy measures without committing to any timelines, especially ahead of the upcoming 2020-21 Commonwealth Budget, the RBA is employing maximum flexibility.”

The government’s budget, due a few hours after the RBA’s policy announcement, is expected to see the debt burden jump to A$712.1 billion ($512.2 billion), or 38% of gross domestic product, in the current fiscal year, according to the median estimate in Bloomberg’s economists survey.

With the increased spending to tackle the economy in recession, economists are forecasting the budget deficit to swell to A$220 billion in the 12 months through June 2021, while easing back to A$128.5 billion in the following fiscal year.

“There’s clear scope for further policy support in Australia, both monetary and fiscal. But we think the RBA is more likely to hold fire in October, and incorporate the government’s fiscal response into their updated forecasts before delivering further easing as soon as the November board meeting. Timing is uncertain, with doubts around the effectiveness of the exchange rate transmission channel given Australia’s services exports are curbed by the international border remaining closed.”

Lowe has urged federal and state governments to take advantage of record low interest rates and invest in infrastructure projects to support employment.

The RBA in March, at the peak of Covid uncertainty, cut the cash rate to 0.25% and set the same target for the three-year yield. It has also provided a lending facility to lower the cost of funding for the banking system and expanded its capacity last month.