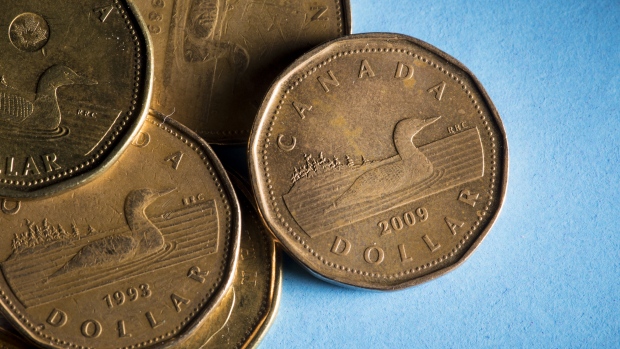 Canadian one dollar coins, also known as Loonies, are arranged for a photograph in Toronto, Ontario, Canada, on Wednesday, July 25, 2018. , Brent Lewin/Bloomberg

The Canadian economy's underperformance relative to the U.S. of late has put downward pressure on the country's currency, but that should help the economy through a temporary slowdown, a Bank of Canada official said.

In a speech on how Canada manages its foreign exchange reserves, Deputy Governor Tim Lane touted the benefits of the country's floating exchange rate policy that has allowed it to quickly adjust to shocks and keep reserves at low levels.

Lane made a few observations about the “recent experience” of the Canadian dollar, which has weakened against the U.S. dollar because of the relative performance of the two economies.

“To a certain extent, movements in the Canadian dollar reflect the comparative strengths of the Canadian and U.S. economies -- which are linked, in turn, to expectations for each country's monetary policy path,” Lane said, according to prepared remarks he will deliver Wednesday at the Peterson Institute for International Economics in Washington.

The U.S. economy has been benefiting from fiscal stimulus, prompting the Federal Reserve to bring rates higher, Lane said. In Canada, U.S. trade policies have been holding back business investment below levels that would be expected given economic fundamentals. The country is also facing lower oil prices, and softer housing investment and consumption that has resulted in a “temporary” slowing of growth.

“This combination of factors has been putting downward pressure on the Canadian dollar,” Lane said. “The lower Canadian dollar, in turn, will help support the economy through this period.”

Lane's speech went over the history of Canada's reserve management practices, pointing out the country hasn't intervened to stabilize the Canadian dollar in over two decades, even though the option is always there if necessary.

“Canada holds foreign exchange reserves as a precaution against extreme events,” Lane said. “Even though Canada has had no history of such events, we know from international experience that they are possible.

Canada's current level of reserves are about $85 billion, or about 5 percent of GDP. That's below what most other countries hold, Lane said.

Lane also said the Bank of Canada monitors closely the rise since the global financial crisis of Canadian-dollar assets as a reserve currency, since they could have implications for both the value of the Canadian dollar and government bond markets.