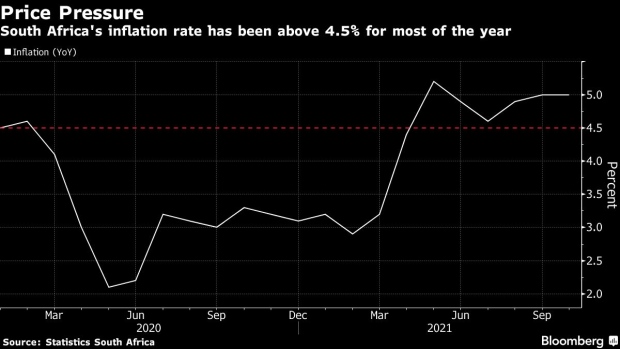 A worker fuels a vehicle on the forecourt of an MBT Petroleum (Pty) Ltd. gas station in Pretoria, South Africa, on Wednesday, Nov. 3, 2021. South Africa's gasoline prices rose to a record on Wednesday, adding to inflationary pressures in an economy that imports almost all of its fuel. Photographer: Waldo Swiegers/Bloomberg , Bloomberg

Inflationary pressures are ramping up in South Africa following a series of fuel price increases.

The Department of Mineral Resources and Energy on Wednesday announced the ninth monthly jump in the regulated gasoline price this year, taking the total increase for 2021 to 40%. The country imports most of its fuel, which accounts for almost 5% of the inflation basket.

Annual consumer-price growth was 5% in October, unchanged from the month before and remaining above the 4.5% mid-point of the central bank’s target band at which it prefers to anchor inflation expectations. The bank increased it benchmark interest rate by 25 basis points on Nov. 18, the first increase in three years, and its models indicate 12 more such increases by the end of 2024.

“We think the risks to inflation over the next six months seem firmly skewed to the upside,” said Jeff Schultz, a senior economist at BNP Paribas South Africa, which forecasts 100 basis points of rate increases in 2022. Key drivers include growing exogenous price pressures, which are already evident in local goods prices, the impact of a weaker rand , expectations of tighter global monetary policy and border closures following the spread of the omicron coronavirus variant, he said.

Absa Group Ltd. said Wednesday that it expects headline inflation to peak at 5.6% in December, 10 basis points higher than its previous forecast, because of steeper fuel prices. The measure is expected to ease toward the mid-point of the central bank’s target range into the second quarter of 2022, Absa economists including Peter Worthington and Miyelani Maluleke said in a note to clients.

BNP retained its economic growth estimate for 2022 at 1.8%, while flagging that the risks were to the downside. That’s marginally more optimistic than the central bank’s 1.7% forecast.

“Growth momentum, which already appears to be stalling, faces bigger challenges next year from possible additional pandemic-related ‘stop-start’ restrictions and a return to structural rigidities as instability in electricity supply looks to be rising again,” Schultz said.

Sebastien Alexanderson, chief executive officer of National Debt Advisors, sees consumer spending coming under pressure as the higher fuel costs lead to increases in the cost of public transport, food and other goods.  Private-sector credit growth slowed to 1.3% in October, with many people weary of taking on additional debt.

“Most South Africans are already struggling to make ends meet,” Alexanderson said. “The most financially vulnerable often live far away from city centers and work hubs. This makes transport costs a huge part of their budgeted expenses.”