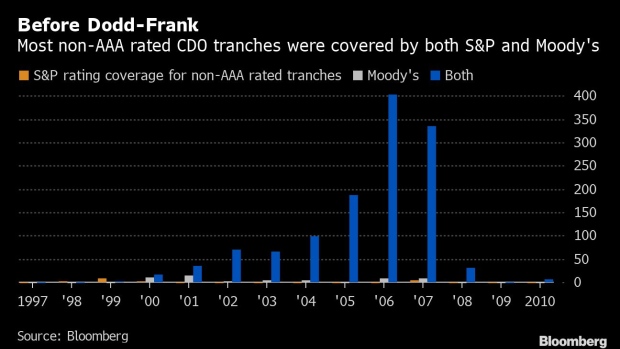 Pedestrians walk through the Financial District of New York, U.S., on Monday, March 30, 2020. Roughly 37,500 people have tested positive for the coronavirus in New York City, officials said on Monday, up about 3,700 from a day earlier. Photographer: Gabby Jones/Bloomberg , Bloomberg

(Bloomberg) -- By now, it’s not hard to see why debt securities cobbled together from some of the riskiest corporate loans fell so far, so fast. Lax underwriting standards, rosy profit projections and rock-bottom interest rates all fueled the irrational exuberance in a market that’s come crashing down as a worldwide health crisis brings the global economy to a standstill.

But one thing that’s largely been overlooked is how, in the past decade, firms offering riskier collateralized loan obligations -- from BlueMountain Capital to Fortress Investment Group and Blackstone’s GSO -- stood to gain higher credit scores by going to S&P Global Ratings, according to a recent academic study.

Here’s how it worked. CLOs are composed of hundreds of junk-rated, or leveraged loans, which are then sliced up and graded by credit ratings firms like Moody’s Investors Service and S&P. Because of the way CLOs work, the most senior portion, or tranche, typically gets rated AAA.

But CLO managers could get a grade bump on non-AAA rated tranches from S&P by creating more slices, according to Boston University’s Steven Kou and University of Waterloo’s Ruodu Wang, who co-wrote a study identifying the trend. The more tranches a CLO had, the higher the rating each added layer could get from S&P. And crucially, the research concluded it had the effect of shrinking the amount allocated to the lowest-rated equity portion.

For CLO firms, the strategy enabled them to offer more return for what seemed like less risk, the study suggests. For S&P, it’s been good for business.

While many market insiders have known about this advantage anecdotally, the study sheds new light on how widespread it has become in the CLO industry for managers to structure deals using S&P to gain higher credit scores.

“I agree with them completely,” said Laila Kollmorgen, a managing director in leveraged finance at PineBridge Investments. “If a deal is brought to the market and it’s rated by S&P, we kind of know why.”

Despite rules put in place to curb risk-taking following the financial crisis, the trend is an example of how Wall Street firms, in their never-ending search for an edge, ended up building more risk into one of the hottest parts of the credit markets, the study suggests. What’s more, it suggests how the business model of the credit ratings industry -- in which S&P and Moody’s are paid by the firms issuing or packaging the bonds -- may still leave it vulnerable to criticisms of grade inflation and conflicts of interest a decade after the crisis.

In an email, S&P said its “credit ratings are designed primarily to provide relative rankings of overall creditworthiness, which includes multiple factors. They are not measures of absolute default probability.”

Of course, S&P’s methodology -- which is the same as what Fitch Ratings uses -- may better reflect the advantages that securitizations are supposed to offer. In normal times, at least, it’s unlikely that every loan will go bust at the same time. And thus far, it’s been rare for the senior CLO tranches to take principal losses, even as prices of non-AAA rated portions have plunged. Some CLO firms have also pointed to how quickly S&P issues ratings as a plus.

Given the amount of demand for CLOs in recent years, it’s possible that managers are simply cutting up CLOs into thinner slices because that’s what investors want -- and the ratings boost from S&P is merely a coincidence.

“You’ll see all these tranches in a deal, and the way CLO managers talk about it is that they’re trying to present a menu to meet investor demand,” said Jason Merrill, a CLO specialist at Penn Mutual Asset Management.

That strategy was profitable as soaring demand encouraged managers to stuff their CLOs with riskier and riskier loans. But now it could potentially make a bad situation worse as the shake-out in credit markets spreads.

An index tracking the price of BBB rated CLO tranches tumbled as much as 28% in March. This month, it’s up about 9%.

The researchers, who wrote the study with Nan Guo of China Bond Rating and Chinese Academy of Sciences’s Bin Wang, believe their findings are the first to empirically show that CLO managers took advantage of S&P’s methodology. (China Bond Rating competes with S&P in the Chinese domestic bond market. The researchers said it didn’t sponsor or influence the study.)

“If an investor isn’t knowledgeable about how CDO and CLO tranches are graded by S&P, they should be careful and regulators should be thinking about this,” Kou said. “It’s become the new ratings shopping.”

A Securities and Exchange Commission spokeswoman declined to comment.

In their paper titled “Self-Consistency, Subjective Pricing, and a Theory of Credit Rating,” the researchers analyzed ratings of structured finance deals before and after the Dodd-Frank Act, which contained a provision intended to discourage issuers from shopping for the highest ratings.

They found that from 1997 through 2010, the year the law was passed, the vast majority of tranches without AAA grades (which were primarily CDOs at the time) were rated by both firms. Since then, of the $276 billion worth of tranches without top-tier credit ratings, 67% of them were graded by S&P alone, versus just 16% for Moody’s, the research says. (Ratings companies can make anywhere from $500,000 to $1 million to rate a new issue.) It’s all the more striking because Moody’s dominates in the market for AAA rated CLO portions. Less than 1% of non-AAA CLO tranches were rated solely by Fitch.

In the data analyzed by the paper’s authors, BlueMountain, Onex Credit Partners, Fortress and GSO Capital Partners have directed the most non-AAA CLO slices by value solely to S&P since 2011. The firms declined to comment.

Using a bit of game theory, Kou and Wang determined the reason for the big shift is that CLO firms started taking advantage of S&P’s rating methodology via “structural maximization.”

S&P’s methodology relies on the probability of default, which only considers the loss of the first dollar. That, according to the researchers, often results in portions of the CLO getting higher ratings than what one might expect elsewhere. Moody’s uses expected loss in its calculation, which leads to little or no grade inflation, the study suggests. In one example cited by the authors, a senior CLO tranche rated by S&P could get a bump from A to AA.

The result, according to the study, is clear: Not only are a disproportionate number of non-AAA rated CLO tranches graded solely by S&P, deals rated by the firm are likely to have more tiers. Before Dodd-Frank, 59% of such structured credit deals had five or more tranches. Now, nearly all of them do, it said.

“The unintended consequence is that issuers are only using one rating agency,” Kou said. “So they create multiple tranches and go to S&P.”

(Adds an index of BBB rated CLO tranches under ‘Menu of Options’ section.)