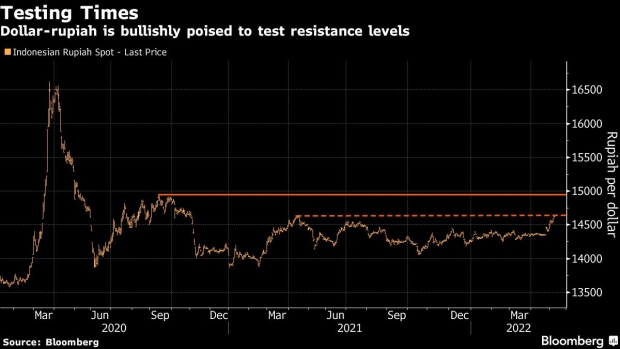 (Bloomberg) -- The rupiah risks weakening to its lowest level in almost two years as Indonesia’s ban on palm oil exports adds to headwinds from interest rate hikes in the US.

The currency fell to a one-year low last week, despite an assurance from the central bank that it would stabilize the currency. Technical support at its April 2021 low is now in danger and a breach of this level would pave the way for a decline to its September 2020 low.

Investors are watching for further export restrictions and rising demand for the dollar, said Divya Devesh, head of Asean and South-Asia FX research at Standard Chartered Bank in Singapore. He sees the rupiah depreciating to 14,800 to the greenback by the end of June, from 14,613 on Friday.

Palm oil accounted for 1.5% of Indonesia’s gross domestic product in 2021 and the prohibition on shipments could cut $2 billion from the nation’s exports for each month it stays in place, according to estimates from Goldman Sachs Group Inc. Sales had been expected to rise by 10% this year before the ban was announced, Goldman analysts wrote in a note.

Investors will have to look past April’s trade data due this week and wait for May data to get a glimpse of the damage that’s being done to exports. The ban kicked off on April 28.

The rupiah is hovering near 14,635 a dollar, its April 2021 low. A breach of that level paves the way for it to fall further with little major technical support until 14,950.

Meanwhile, Bank Indonesia is expected to lag behind the aggressive pace of rate hikes from the Federal Reserve.