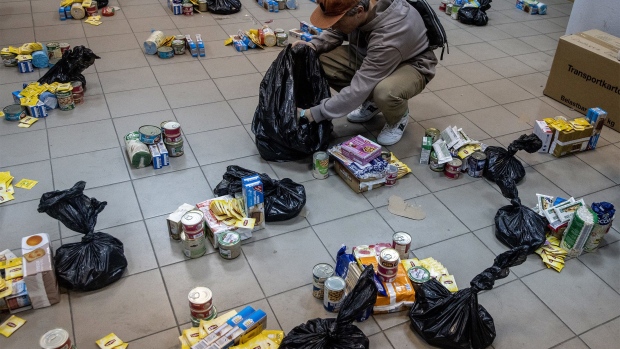 KYIV, UKRAINE - MARCH 19: A volunteer works to make food packages from donated goods from European countries to distribute to cities around Kyiv at an aid center on March 19, 2022 in Kyiv, Ukraine. Russian forces remain on the outskirts of the Ukrainian capital, but their advance has stalled in recent days, even while Russian strikes - and pieces of intercepted missiles - have hit residential areas in the north of Kyiv. An estimated half of Kyiv's population has fled to other parts of the country, or abroad, since Russia invaded on February 24. (Photo by Chris McGrath/Getty Images) , Photographer: Chris McGrath/Getty Images

(Bloomberg) -- A top Ukrainian cybersecurity official said Wednesday that Russian hackers are attacking logistical lines in the war-torn country, including those delivering food and humanitarian support.

Zhora, who has provided regular updates on the role of cyberattacks in the conflict, said Russian hackers have targeted government and private-sector organizations, including internet-service providers and energy companies.

The attacks have mostly been unsuccessful or caused minor disruptions, he said. He also said that despite efforts by Russia to knock out Ukrainian communication networks, most areas have maintained cellular coverage, or restored outages quickly.

Most of Ukraine’s telecommunications infrastructure is privately owned, and he described efforts to keep the networks functioning as “very close to heroism.”

“This is one of the factors that probably explains the success of Ukrainian resistance,” he said.

“This is backup infrastructure,” Zhora said. “It was tested everywhere, and it works.”

Ukrainian officials have observed hacking activity from groups aligned with other governments, according to Zhora, but he said he didn’t yet know if those efforts are aligned with Russia.

He also said cyberattacks have also targeted charitable organizations in Europe that are providing support to refugees. In a March 4 blog post on its assistance in Ukraine, Amazon.com Inc. said it had “seen several situations where malware has been specifically targeted at charities, NGOs and other aid organizations to spread confusion and cause disruption.”

“In these particularly egregious cases, malware has been targeted at disrupting medical supplies, food and clothing relief,” according to the blog.

Moscow has consistently denied involvement in any malicious cyber activity.