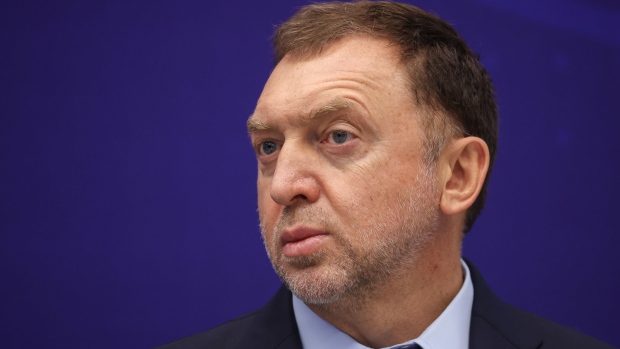 Oleg Deripaska, Russian billionaire, listens during a panel session on day three of the St. Petersburg International Economic Forum (SPIEF) in St. Petersburg, Russia, on Friday, June 4, 2021. President Vladimir Putin will host Russia’s flagship investor showcase as he seeks to demonstrate its stuttering economy is back to business as usual despite continuing risks from Covid-19 and new waves of western sanctions. , Bloomberg

(Bloomberg) -- Russian oligarch Oleg Deripaska violated sanctions in a bid to ensure two of his children were born in the US and would have citizenship there, the Justice Department says.

Deripaska, 54, who has been on the US Treasury’s sanctions list since 2018 and is banned from traveling to the country, spent hundreds of thousands of dollars to fly his girlfriend to the US in 2020 and house her in a luxury penthouse in Beverly Hills for 6 months before she gave birth to their child, according to an indictment unsealed on Thursday.

Federal prosecutors in Manhattan also charged Ekaterina Olegovna Voronina, who they say is Deripaska’s girlfriend, for lying to officials about her reason for traveling to the US in June, when she allegedly attempted to have another child in Los Angeles. She was turned away.

“Despite his cozy ties with the Kremlin and his vast wealth acquired through ties to a corrupt regime, Deripaska did all he could to lead a life in a stable, free, democratic society - even if that meant lying and evading US sanctions,” said Andrew C. Adams, director of the Justice Department’s KleptoCapture task force.

“The hypocrisy in seeking comfort and citizenship in the United States, while enjoying the fruits of a ruthless, anti-democratic regime, is striking.”

A spokesman for Deripaska didn’t immediately respond to an email request for comment.

Some of the comforts the billionaire allegedly sought were relatively prosaic, according to the indictment. He asked his co-conspirators to buy him iPhones and also T-shirts from the mid-market American Eagle brand.

Deripaska “wants these t-shirts, 10 counts, size XL. Could you find them and urgently send them?” one of his co-defendants, Natalia Bardakova, wrote to another, Olga Shriki.

The majority shareholder of Russian metals giant En+ Group International, Deripaska has a net worth of around $3 billion, according to the Bloomberg Billionaire Index.

Shriki, a naturalized US citizen living in New Jersey, was the only one arrested in the scheme on Thursday. Though Deripaska isn’t in the US, he has property in the country that could be subject to forfeiture. In the indictment, prosecutors list US assets including a Wells Fargo account, a Washington mansion and two Manhattan townhouses, one in the West Village and the other on the Upper East Side. The Washington mansion and West Village townhouse were searched by the FBI last October.

Deripaska was targeted for US sanctions, along with several other leading businessmen close to Russian President Vladimir Putin, following the February invasion of Ukraine, and also in an earlier round in 2018.

Prosecutors claim Deripaska illegally used the US financial system to maintain the Washington and New York properties. He used Shriki and one of the other defendants to obtain hundreds of thousands of dollars worth of services using US banks, they said. He also allegedly used his co-conspirators to send Easter gifts to an unnamed US television host and flowers to a former member of the Canadian parliament.

Many of the US expenses cited by prosecutors related to Voronina’s 2020 six-month birthing trip, for which she flew to California via private jet. Shriki allegedly received $170,000 to cover costs including rent on the Beverly Hills penthouse, medical providers, nannies and other services.

According to prosecutors, Deripaska counseled Voronina on her US visa application, telling her to be “careful” about disclosing her plans to give birth there.

The government says Voronina had a child in the US in August 2020. She allegedly omitted Deripaska’s name from the birth certificate but spelled the child’s name using a variation of his surname with a couple of letters changed.

Deripaska authorized transfers of $400,000 to cover similar costs for a second US birth, according to the indictment, but Voronina was stopped by DHS officers after flying to Los Angeles in June.

She allegedly told them her child’s father was “Alec Deribasko,” but said she didn’t know where he lived or his occupation. Prosecutors says he told the officers her parents were paying for her trip.