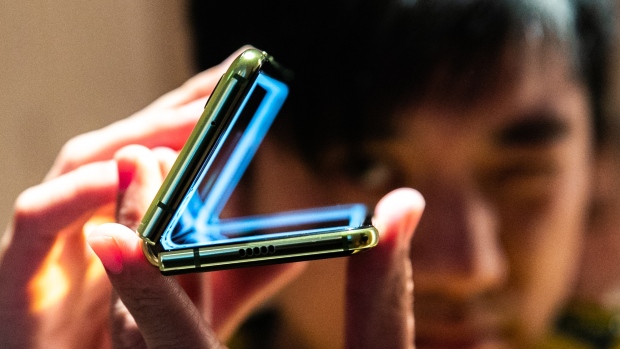 Some test models of Samsung Electronics Co.’s new foldable phone suffered defects after only days of use, casting a shadow over next week’s introduction of a US$1,980 device meant to rejuvenate a flagging market and showcase the Asian company’s technology expertise.

Several publications, including Bloomberg News, outlined a bevy of problems with test versions of the device, which folds inward like a notebook. Bloomberg’s review unit experienced issues after a plastic protective layer was removed on Monday. By Tuesday night, a small tear had developed at the top of the hinge, where the gadget opens. Then the display failed to operate properly.

The Korean company suffered a black-eye with a previous major launch in 2016, when it recalled the Galaxy Note 7 after consumers reported issues with batteries that burst into flames. The world’s largest smartphone maker is counting on ground-breaking gadgets to propel growth and excite consumers as demand for mobile devices flattens. Pre-orders began Monday for a marquee device expected to usher in a wave of smartphones that can unfurl into tablets. The Galaxy Fold’s 7.3-inch screen teased how users can juggle three apps at once and view video with more clarity.

“We have received a few reports regarding the main display on the samples provided. We will thoroughly inspect these units in person to determine the cause of the matter,” Samsung said in a statement Thursday. The phone’s commercial launch is still planned for April 26.

The company’s shares slid 3.1 per cent, outpacing a 1.4 per cent fall in the country’s benchmark index.

In one of the more serious apparent flaws, the inner screen stopped working. First, the left side of the display went dark -- then the right side developed problems before also failing completely. Other reviewers reported similar issues, including flickering visuals and how the area around the central hinge lost viewable pixels. The external display still functioned for Bloomberg’s review team when the phone is closed. Separately, the demo unit’s screen retained permanent marks wherever a fingernail made contact during the course of use.

Other reviewers however reported no major issues with the gadgets Samsung provided. In an email sent Tuesday -- a day after providing the demo units -- it asked media not to remove a “special protective layer.” The device’s packaging didn’t discourage the attempt however, and the sheet seemed similar to the protective films that come with most phones, tablets, and TVs right out of the box.

“The main display on the Galaxy Fold features a top protective layer, which is part of the display structure designed to protect the screen from unintended scratches,” Samsung said in its statement. “Removing the protective layer or adding adhesives to the main display may cause damage. We will ensure this information is clearly delivered to our customers.”

Samsung may need to consider postponing the rollout of the Galaxy Fold because it risks a public relations “fiasco” if the problems are widespread, Anthea Lai and Anand Srinivasan, analysts at Bloomberg Intelligence, said in a report.

“Delaying the Galaxy Fold’s expected April 26 launch date -- while not certain to occur -- could save the brand’s reputation from a repeat of the Note 7 debacle,” they wrote. “Postponing the rollout would also have minimal impact to earnings, as only about 1 million units are expected to ship this year.”

While it’s still too early to gauge how much demand there will be for smartphones with flexible screens, Samsung and other rivals are eager to gain an edge over Apple Inc. in the US$495 billion industry. Samsung had forecast it will produce at least 1 million foldable phones this year, a fraction of its overall shipments in 2018. Huawei Technologies Co., Xiaomi Corp. and Lenovo Group Ltd.’s Motorola are all working on foldable phones. Research firm Gartner expects the overall market to expand to 30 million units by 2023.

“Delay isn’t a good thing,” Lai said, but “Huawei probably won’t start shipping the Mate X until June, so Samsung still has time to claim the number one spot.”

Even before reports of the review models’ issues surfaced, there had been questions about the general durability of foldable phones. The company has released footage of machines repeatedly opening and closing the phone in what it dubbed an “extremity test.”