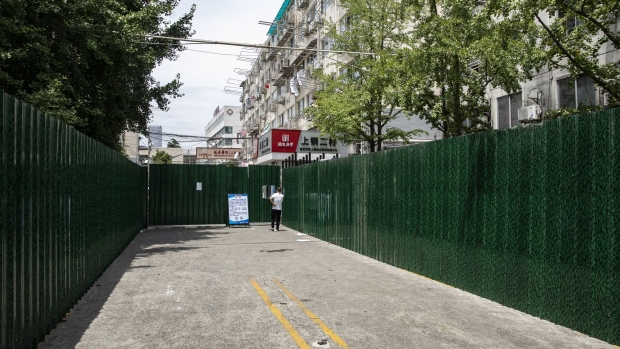 A fenced residential neighborhood due to Covid-19 in Shanghai, on July 6. Photographer: Qilai Shen/Bloomberg , Bloomberg

(Bloomberg) -- Shanghai reported the most virus infections since late May, fueling concerns China’s financial hub may look to ramp up restrictions to curb transmission.

The city announced 54 local Covid infections for Wednesday, including two that were found outside of quarantine, with the latter raising concerns that the virus could be quietly spreading through communities. Shanghai has already increased its mass testing, with with 10 districts and parts of two others -- out of the financial hub’s total of 16 -- conducting two PCR tests over a three-day period.

Elsewhere, Beijing announced four cases. Authorities said Wednesday that they had detected the highly infectious BA.5.2 subvariant in the capital.

The fresh flareup in Shanghai comes soon after its 25 million people emerged from a brutal two-month lockdown that took an enormous economic and social toll, and the local spread of a highly infectious omicron subvariant is set to pose a major challenge to China’s Covid Zero strategy.

While authorities are yet to roll out strict lockdowns in major parts of the country, President Xi Jinping has reaffirmed the country would stick to Covid Zero and said China would rather endure some temporary impact on economic development than let the virus hurt people’s safety and health.