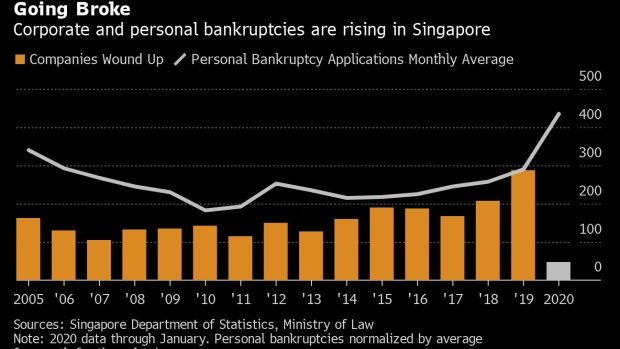 The domes of the Esplanade Theatres on the Bay stand at Marina Bay as the sun sets in Singapore, on Sunday, June 4, 2017. Hunger for Singapore land is adding to signs the city’s housing market is making a comeback after three years of declining prices. With new home sales surging after an easing of property restrictions in March, developers are becoming more aggressive in bidding at land auctions. Photographer: Sanjit Das/Bloomberg , Bloomberg

(Bloomberg) -- Singapore is bracing for a further jump in bankruptcies after cases surged to the highest in years even before the coronavirus pandemic hit.

The number of individuals filing for bankruptcy soared 47% from a year earlier to 434 in January, the highest since October 2004, according to the latest data from the Law Ministry’s Insolvency Office. Companies in liquidation jumped to 287 last year, the highest since records began in 2005.

Singapore’s already-slowing economy is now poised to shrink as the virus slams trade and tourism. That’s likely to send more businesses and individuals broke, leading to an increase in bad loans at banks including DBS Group Holdings Ltd. even as they ease borrowing terms.

Sanford C. Bernstein analysts expect soured loans to rise and lending to contract because of the virus-fueled pain. The non-performing loan ratios for DBS and Oversea-Chinese Banking Corp. could climb to 1.8% this year from 1.5% in 2019, Kevin Kwek and Pranav Gundlapalle said. United Overseas Bank Ltd.’s ratio may jump to 1.9% from 1.5%, they said.

UOB said earlier this month that bad-loan costs are likely to rise more than previously anticipated, due to the outbreak and a dramatic slump in oil prices.

Singapore’s economy may shrink 0.3% this year, with the potential for a more severe decline if the shutdown at neighboring Malaysia takes a heavier toll, economists at Malayan Banking Bhd. predict. The government is preparing a second package of stimulus measures on top of the S$6.4 billion ($4.4 billion) allocated last month to fight the coronavirus spread and help businesses and consumers.