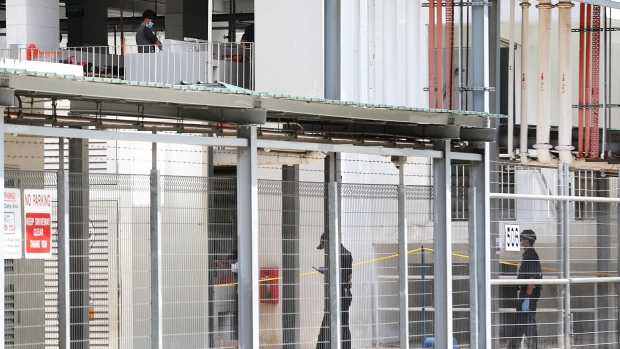 (Bloomberg) -- Singapore’s Building and Construction Authority ordered a stop to activities at some construction work sites after a new Covid-19 cluster was found at the country’s largest foreign worker dormitory, raising concerns of a resurgence in virus infections.

A total of 58 cases were identified in the Sungei Tengah Lodge, which houses approximately 16,000 people. All individuals were asymptomatic and were detected through various screening procedures, according to a joint statement from the BCA, Ministry of Manpower and Ministry of Health. Another 4,800 workers from the same dormitory have been placed on stay-home notices as a precaution.

The resurgence could pose a challenge for the Southeast Asian country as it attempts to cautiously restart its economy after earlier entering a two-month lock-down designed to stem the spread of the virus. The city-state entered a technical recession in the second quarter, shrinking a record 42.9% from the previous three months on an annualized basis.

Following the discovery of the cluster in Sungei Tengah Lodge, twenty affected construction sites were issued a time-out notice that allows for disinfection of the premises and a review of on-site safety measures, according to the BCA.

Another confirmed coronavirus case was also identified in a separate foreign worker dormitory that had previously been declared clear of the virus by authorities. The infected person in the Tuas View Dormitory was linked to five previous cases, creating a new cluster, according to the Ministry of Health. The dorm had originally been cleared on August 4.