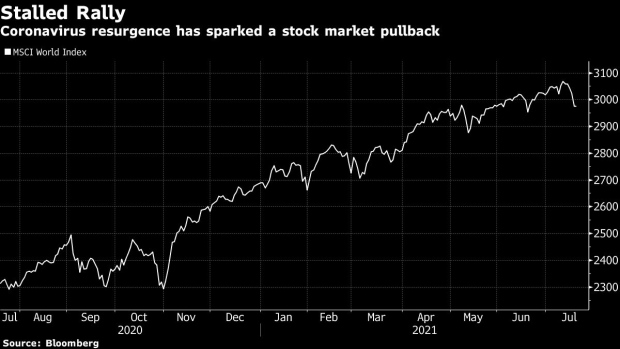 (Bloomberg) -- The great IPO boom of 2021 has already smashed the record for the busiest summer ever, and there are plenty of big deals still to come. Now wobbly markets are threatening to cool the frenzy.

Since the start of June, listings by the likes of F45 Training Holdings Inc., the provider of fitness classes backed by actor Mark Wahlberg, Membership Collective Group Inc., the company behind the Soho House members clubs, and ride-hailing giant Didi Global Inc. have raised more than $90 billion through initial public offerings, according to data compiled by Bloomberg.

Stock indexes at record levels, until last week at least, and cash-rich investors have lured private equity sponsors and startup founders alike to the equity market. But now investors have been spooked by the resurgent coronavirus, sending the MSCI World Index down for six straight sessions, heading for its longest losing streak since the pandemic began.

Add in escalating tensions between the U.S. and China and a Chinese crackdown on IPOs, and the case for fresh listings is turning murkier.

“We are unlikely to see the same level of activity in the latter part of the year,” said Paul Go, global IPO leader at EY. “There are some headwinds including the tensions surrounding cross-border U.S.-China listings, the threat of rising infections in many parts of the world and increased market volatility.”

Not that it has deterred IPO hopefuls yet. Robinhood Markets Inc., the trading app company that helped fuel meme-stock mania, plans to raise more than $2 billion in a listing that’s set to be one of the year’s largest. E-commerce company Rent the Runway Inc. filed confidentially Monday for a U.S. IPO.

And companies are still managing to list with robust valuations. Buyout group Bridgepoint Group, for example, is expected to price its initial share sale at the top end of a marketed range ahead of a London listing on Wednesday, defying signs of pricing pressure in a crowded market.

Although IPO issuers have always been beholden to market swings, increased regulatory oversight is a new risk. Beijing’s July 10 announcement that almost all businesses trying to go public in another country will require approval from a newly empowered cybersecurity regulator amounts to a death knell for Chinese IPOs in the U.S., with the Asian country’s clampdown triggered by Didi’s decision to push ahead with a New York listing despite objections from regulators.

And the special purpose acquisition company bonanza that propelled the global IPO market to a record-high in the first quarter is petering out in the U.S. as regulatory scrutiny over accounting rules and a pickier investor base cool demand for new offerings.

While mega SPAC deals such as the one for Medicare and Medicaid secondary payments firm MSP Recovery have caught the market’s attention, some blank-check firms have struggled.

Bill Ackman’s SPAC this week withdrew its offer for a 10% stake in Universal Music Group, with the billionaire investor buying the shares through his hedge fund instead. And a SPAC backed by former BP Plc CEO Tony Hayward ended its debut session in Amsterdam on Monday without a single share being traded as buyers and sellers remained too far apart on price.