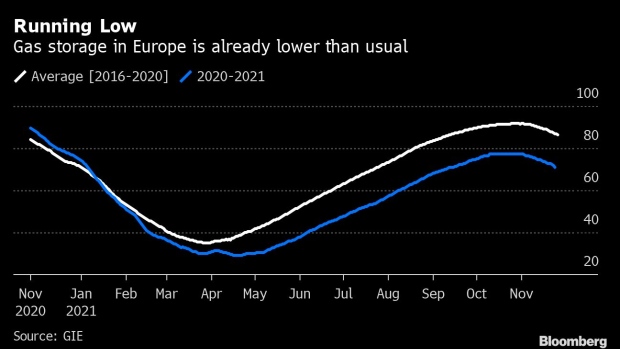 (Bloomberg) -- Snam SpA’s natural-gas storage business is attracting interest from infrastructure investors, according to people familiar with the matter.

The Italian company is considering its options after receiving approaches from potential buyers of a minority stake in the unit including Macquarie Group Ltd.’s infrastructure arm, the people said, asking not to be identified because the information is private.

Deliberations are in the early stages and there’s no certainty they’ll result in offers, the people said. Representatives for Macquarie and Snam declined to comment.

Snam’s gas storage Italian unit has a regulatory asset base of about 4 billion euros ($4.5 billion). It could appeal to other infrastructure investors seeking to bet on the global shift away from fossil fuels as Snam’s sites can be used to store hydrogen. Snam aims to only be transporting decarbonized gas by 2050, according to its website.

Through its subsidiary Stogit, Snam is the largest operator of natural-gas storage sites in Italy and biggest in Europe with capacity for 17 billion cubic meters. The role of such facilities, which are typically made from depleted hydrocarbon fields, aquifers, or salt caverns, has been in the spotlight this year.

Europe’s previous cold winter and sluggish refill during the summer meant inventories started this heating season at their lowest level in at least a decade. That’s pushed gas prices to record highs. To compound the problem, reduced shipments from Russia indicate that even by the start of winter next year, Europe’s gas inventories will be inadequate, consultant Energy Aspects Ltd. said in a note.

Gas in storage can help cushion seasonal price volatility and protect economies from price spikes, which have been blamed for rising inflation this year.