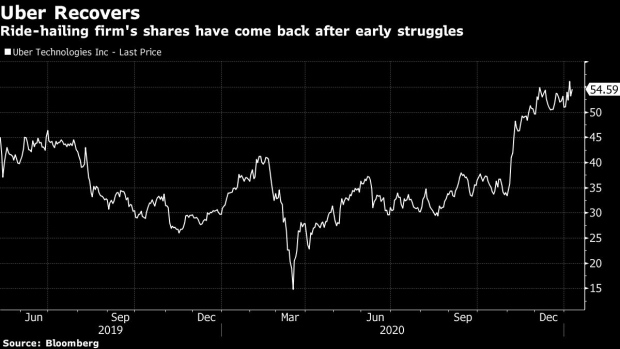 A commuter uses the Uber Technologies Inc. app on a smartphone in view of 30 St Mary Axe also known as 'the Gherkin' in this arranged photograph in London, U.K., on Monday, Nov. 25, 2019. Uber lost its license in London for the second time in less than three years, putting one of its biggest markets outside of the U.S. at risk after the transport regulator said it failed to address safety concerns. Photographer: Jason Alden/Bloomberg , Bloomberg

An affiliate of the investment fund called SB Cayman 2 sold 38 million shares on Jan. 7 at an average price of $53.46, according to a filing with the U.S. Securities & Exchange Commission. SoftBank still holds about 184.2 million shares, according to the filing.

But Uber shares rallied more than 150% from their low in March of last year, as capital markets surged. Now Didi, the largest investment in SoftBank’s portfolio, is also considering an IPO in the second half of this year, Bloomberg has reported.

SoftBank’s Son Is Poised for Another IPO Windfall in 2021

SoftBank shares have also rallied as investments like Uber have recovered and several of its portfolio companies have gone public.