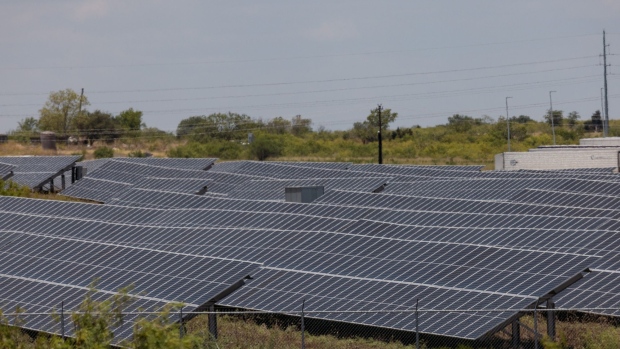 Solar panels during a heatwave in Austin, Texas, US, on Monday, July 11, 2022. Texas residents and businesses, including the biggest names in oil, autos and technology, are being asked to conserve electricity Monday afternoon during a heat wave that's expected to push the state's grid near its breaking point. Photographer: Jordan Vonderhaar/Bloomberg , Bloomberg

(Bloomberg) -- Natural gas’s dominance as power-plant fuel in the US is fading fast as the cost of electricity generated by wind farms and solar projects tumbles, according to Guggenheim Securities.

Utility-scale solar is now about a third cheaper than gas-fired power, while onshore wind is about 44% less expensive, Guggenheim analysts led by Shahriar Pourreza said Monday in a note to clients.

“Solar and wind now present a deflationary opportunity for electric supply costs,” the analysts said, which “supports the case for economic deployment of renewables across the US.”

Gas prices have surged amid a global supply crunch after Russia’s invasion of Ukraine, while tax-credit extensions and sweeping US climate legislation have brought down the cost of wind and solar. Renewables-heavy utilities like NextEra Energy Inc. and Allete Inc. stand to benefit, and companies that can boost spending on wind and solar will also see faster growth, Guggenheim said.