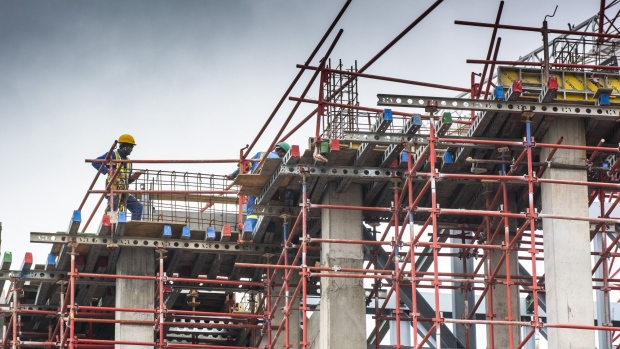 Construction work on a building in the Sandton district of Johannesburg, South Africa, on Thursday, Nov. 12, 2020. Jobs were at the center of a post-virus reconstruction and recovery plan presented by President Cyril Ramaphosa last month, with the government committing 100 billion rand ($6.37 billion) to create public and social employment opportunities. Photographer: Waldo Swiegers/Bloomberg , Bloomberg

South Africa’s government is planning more measures to bolster its ailing building industry after banning the use of imported cement on state construction projects.

“Government is undertaking research across a range of construction-related products where there appears to be significant potential for localization,” Stephen Hanival, chief economist at the Department of Trade, Industry and Competition, said in an emailed response to questions. “Further announcements will be made in due course.”

The country’s preferential procurement policy framework enables the department to designate sectors for localization in line with national development and industrial policy goals. While the government has pursued localization since 2014, it has become more strategic since the advent of the pandemic with business, government and labor groups agreeing on an initial list of 42 products and sub-sectors that should be prioritized, Hanival said.

An Oct. 11 directive issued by the National Treasury that aims at ensuring locally produced cement is used for state projects sent shares in leading producer PPC Ltd. to their highest level since 2019. It was the first of its kind since President Cyril Ramaphosa touted localization last year as a key strategy to revive an economy hard-hit by the coronavirus pandemic.

Localization is seen as an approach to boost output, revive the domestic manufacturing industry and create jobs in an economy that contracted the most in at least 27 years in 2020 due to Covid-19 restrictions and where more than a third of the workforce is unemployed. Manufacturing’s contribution to gross domestic product declined to 11.8% in 2020, from 19.2% in 1994, when the ruling African National Congress came to power, World Bank data shows.

South Africa spends about a quarter of its national wealth on buying foreign goods every year and has an “over-propensity” to import products that could otherwise be domestically produced, the DTIC said in May. The nation’s recovery plan also targets local production of a range of other products, including consumer and capital goods, and car and rail components.

“Such policies would benefit small companies that have not only been hard hit by the pandemic, but also need customers such as government to sustain them,” said Thabi Leoka, an independent economist. “If localization involves large monopolies being given government contracts, then it’s misplaced.”

The localization drive will run alongside six so-called Master Plans aimed at supporting the domestic poultry, sugar, automobile, furniture, steel and metal fabrication, and clothing, textile, footwear and leather sectors. Together, the industries account for about 6% of GDP and 700,000 jobs, according to the DTIC.

Localization isn’t a panacea and may have “adverse economic consequences” by creating monopolies, reducing competition, increasing the costs of doing business and weakening incentives for productivity and innovation” said Peter Leon, a partner and Africa co-chair at law firm Herbert Smith Freehills LLP. Policies that create barriers to cross-border flows of goods and services could contravene South Africa’s international trade obligations and could result in its commercial partners seeking recourse, he said.