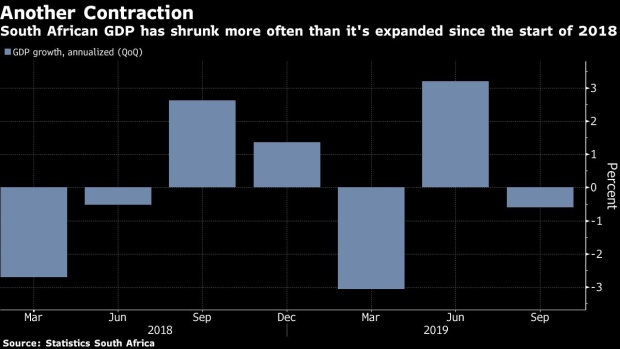 South Africa’s economy contracted for a second quarter this year in the three months through September as farming, mining and factory output slumped. The rand extended its decline against the dollar.

Gross domestic product shrank an annualized 0.6%, compared with a revised 3.2% expansion in the second quarter, Statistics South Africa said Tuesday in the capital, Pretoria. The median estimate of 14 economists in a Bloomberg survey was for no growth. The economy expanded 0.1% from a year earlier.

To contact the reporters on this story: Gordon Bell in Johannesburg at gbell16@bloomberg.net;Adelaide Changole in Nairobi at achangole2@bloomberg.net

To contact the editors responsible for this story: Benjamin Harvey at bharvey11@bloomberg.net, Rene Vollgraaff, Paul Richardson