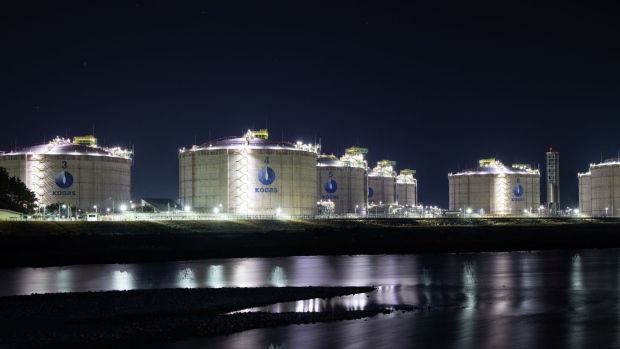 (Bloomberg) -- South Korea’s government is being criticized for including natural gas in a category of activities that it deems will help cut emissions.

Liquefied natural gas was included in a taxonomy to accelerate green goals released by the Environment Ministry on Dec. 30, while nuclear energy was left out. LNG is in the transition section, so shouldn’t be seen as an outright green activity, but is essential in the move away from dirtier fuel, the ministry said.

While South Korea has a goal of being carbon neutral by 2050, the decision shows that it still sees natural gas, a fossil fuel, as key to the transition. Seoul’s stance is similar to the European Union, whose plan to allow some natural gas and nuclear energy projects to be labeled as sustainable has also come under fire from activists.

“We have great concerns about the utility of the taxonomy scheme because it’s not sending the right signals to investors,” said Youn Sejong, climate finance program director at South Korean non-profit Solutions for Our Climate. “Now that the taxonomy includes fossil fuels we expect to see serious greenwashing.”

The rules that governments are putting in place to help them achieve carbon neutrality goals are coming under increasing scrutiny from civil society groups that are concerned they’re not strict enough or will be able to be gamed by the private sector. Investors in gas-fired generation in Korea may also be able to make the case they’re being environmentally friendly due to the rules.

The classifications will be updated every two or three years based on stakeholder feedback, and nuclear power will be kept under review as the government assesses global trends, the ministry said.

“Compared with other major countries, our manufacturing and energy-intensive industries heavily depend on fossil fuel,” it said. “Going forward though, we’ll try to encourage low-carbon or carbon-free power plants such as fuel cell or ammonia generation.”

Yoon Joonbyeong, a lawmaker from President Moon Jae-in’s ruling Democratic Party, said he had a meeting with the environment ministry before the taxonomy was finalized to make sure that LNG was only deemed green during the transition phase. That view was reflected in the final version, and the exclusion of nuclear is also welcome, he said.

“The decision to include LNG generation in the taxonomy is regrettable,” Yoon said. “We’ll need to keep a close eye on how the classification is executed by the government and used by companies and investors.”