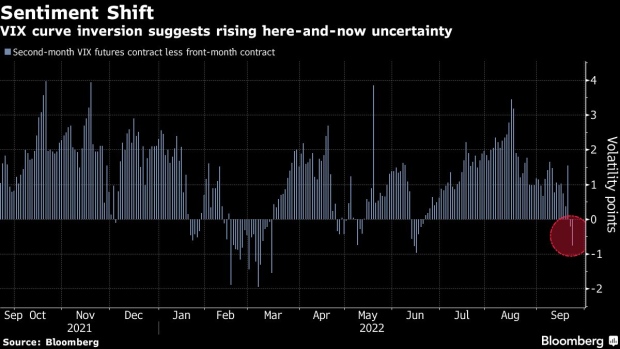 (Bloomberg) -- A hawkish Federal Reserve crushed whatever hope investors had, plunging the stock market into a doom spiral last week and sparking traders’ fears that even more losses are on the way.

Any hopes that stocks had priced in the bulk of the bad news heading into the Fed’s latest meeting are now dashed. The S&P 500 Index lost more than 4% since mid-day Wednesday, when the central bank raised rates by three-quarters of a percentage point and signaled that a more aggressive pace of hikes than expected is on the way.

For the first time since June, traders are paying more for protection against short-term gyrations in the S&P 500 than for long-term swings, a sign of confusion about where stocks are headed. Meanwhile, a cascade of estimate cuts from Wall Street analysts conveys a similarly grim message. Strategists at Goldman Sachs Group Inc., for instance, sliced their year-end view on the broad equities benchmark to a level that implies a 2.5% drop from Friday’s close. And more pain may be coming, strategists said.

“This year’s uncomfortable drop in the stock market likely isn’t over anytime soon,” Yung-Yu Ma, chief investment strategist at BMO Wealth Management, said in an interview. “The reality is a heavy cloud will continue to hang over equities in the coming weeks and months until inflation eases significantly.”

Markets are reacting to the clear message from Fed Chair Jerome Powell’s Wednesday press conference: The fight to tame inflation will create real economic damage. Now bets are piling up that it will cause even more trouble for equities. On Friday, S&P 500 nearly erased its two-month rebound through mid-August and sent the yield on two-year Treasuries to the highest since 2007. Equities have fallen by at least 3% in four of the last five weeks.

Volatility has returned as well, with the Cboe Volatility Index, or VIX, briefly rising beyond 32 on Friday for the first time since June. Front-month futures contracts on the VIX are trading 0.7 volatility points above the second-month futures, forming a so-called inverted volatility curve that usually signals heightened investor fears.

The S&P 500 price-earnings ratio that strategists at Goldman Sachs consider fair when rates are rising faster than expected is 15 times earnings, a level the bank adjusted down from 18 times. The bank slashed its year-end S&P 500 view by 700 points to 3,600 to account for that.

Prior bear markets that hit during full-blown recessions have been brutal for the S&P 500, sending it down by 35% on average in the nine prior instances since World War II. A similar scenario could happen again if the benchmark falls beneath its recent low of 3,666.77 reached in June, said Sam Stovall, chief investment strategist at CFRA (the S&P 500 closed 0.7% above that level on Friday.) If it breeches that level, it could plunge to 3,200, which represents a 33% drop from a record high and implies a 14.9 valuation multiple (based on a $215 forward per-share profit estimate), he said.

“This will be a bear market accompanied by a recession, but I don’t think we’re headed for a mega meltdown,” Stovall said in an interview. “We may have to wait until the first quarter of 2023 until the final low is finally in place.”

Of course, the bearish environment is also creating factors that long-term bulls can lean on.

Going back to 1995, this nine-month rout has sent stocks into its third-longest run of extreme pessimism, data compiled by Ned David Research show. But in the year following prior streaks of such bearishness, the S&P 500 has rallied 20% on average. Adding to the longer-term optimism is the hope that the sooner the Fed hikes interest rates to the point that would combat inflation, the sooner it can start to ease up.

“For long-term investors, these are the opportunities that we sit and wait for to buy equities at advantageous prices,” Eric Diton, president and managing director of the Wealth Alliance, said by phone. “Bear markets don’t come along that often.”