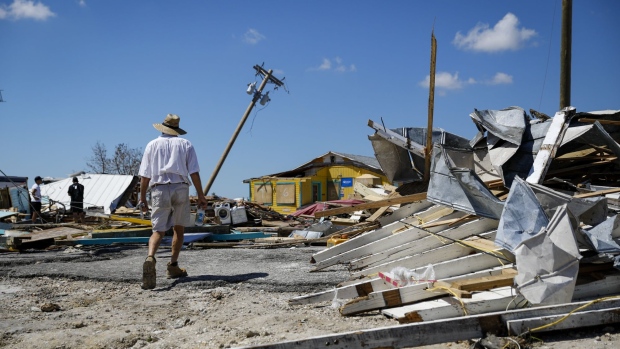 A resident surveys damage following Hurricane Ian in Matlacha Isles, Florida, US, on Saturday, Oct. 1, 2022. Research firm Enki Holdings LLC pegs the economic cost of Hurricane Ian at $60 billion to $70 billion, based on damage to homes and infrastructure, as well as the cost of reconstruction and longer-term knock-on effects including the disruption in tourism. , Bloomberg

(Bloomberg) -- When Hurricane Ian barreled into Florida in September, bringing extreme winds and torrential rains, it caused between $50 billion and $65 billion in insured damages. That makes it not only this year’s costliest natural disaster but the second-costliest insured loss ever after 2005’s Hurricane Katrina, according to a report from the Swiss Re Institute, the research arm of the reinsurance giant.

The annual report, which looks at losses from natural catastrophes such as floods, hurricanes and wildfires, estimates the total economic losses will reach $260 billion in 2022. That’s down 11% from last year, but still well above the 10-year average of $207 billion. Only a portion of the 2022 damage was insured, but the insured losses follow a similar trend. They are expected to come to $115 billion this year, 6% below last year but higher than the 10-year average of $81 billion.

Insured losses have been on a long-term upward trend for a while, according to the Institute, and extreme events caused by climate change shoulder much of the blame.

“Extreme weather events have led to high insured losses in 2022, underpinning a risk on the rise and unfolding on every continent,” Martin Bertogg, the reinsurer’s head of catastrophe perils, said in a statement. “When Hurricane Andrew struck 30 years ago, a USD 20 billion loss event had never occurred before — now there have been seven such hurricanes in just the past six years.”

Climate change is warming oceans and super-charging storms. This year saw relatively few major hurricanes in the US, but the report highlights the threat of even one major hurricane hitting a densely populated coastline, as Ian did.

Erdem Karaca, head of catastrophe perils in the Americas for Swiss Re, said hurricanes have traditionally caused wind and storm-surge damage but climate change means they now bring more rain and flooding. It is also extending the footprint of the storms. Ian, he pointed out, led to  flooding far beyond the west coast of Florida, where the storm made landfall, in the center and east coast of the state and into the Carolinas.

The insurance industry also continues to be plagued by what are known as secondary perils, the report confirms.  Historically, insurers regarded hurricanes and earthquakes as the only disasters that could cause monster damages. Everything else — including heavy rains not associated with hurricanes and wildfires — got put into a secondary bucket. But thanks to climate change, these events have become both deadly and more destructive.

In 2022, secondary perils have included torrential rains contributing to floods in Australia last February and March — which caused $4 billion in damages, making them the country’s costliest natural disasters — and violent hailstorms in Europe.

Another reinsurer, Munich Re, said that hurricanes and tropical storms in the Atlantic alone caused about $110 billion in damages and losses this year, with Ian accounting for $100 billion of that.