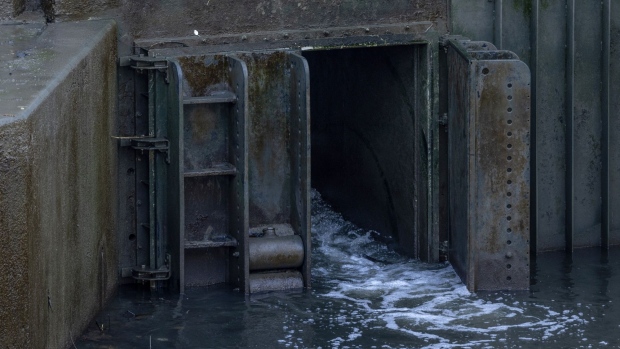 PUTNEY, ENGLAND - NOVEMBER 16: A sewage overflow outlet discharges into the River Thames on November 16, 2022 in Putney, England. England's water-treatment companies are under increased scrutiny after a series of incidents where, following heavy rains, raw sewage was discharged into seas and rivers. The practice of discharging excess wastewater, known as combined sewer overflow, is permitted but companies can be fined if the overflows to do not meet certain criteria. (Photo by Dan Kitwood/Getty Images) , Photographer: Dan Kitwood/Getty Images Europe

A report by the group argued that most of these discharges, known as “dry spills” because they happen in the absence of rain, occurred in places where water quality was previously rated excellent.

Water companies are allowed to discharge sewage into rivers and seas when unusually heavy rainfall overwhelms their sewage treatment systems.

Surfers Against Sewage looked at self-reported water company overflow notifications in the 12 months to October. The organization then checked if there had been any rainfall in the two days before the discharge at each location.

Still, not all dry spills are illegal. Some are permitted if pressurized ground water has squeezed its way into pipes, requiring overflows to prevent flooding. Other factors can also affect the legality of a spill.

A spokesperson for Water UK, the industry group for water companies, said the sector is set to deliver a £56 billion ($68 billion) infrastructure program to improve rivers and coastlines. It also said the government should clamp down on housing developments that overwhelm local sewers and stop people flushing wet wipes down the toilet.

Utility companies have faced criticism for paying millions of pounds in bonuses to executives despite mass water leaks as well as sewage spills.

“Shareholders and CEOs are unashamedly profiteering off pollution,” said Amy Slack, head of campaigns and policy at Surfers Against Sewage.

Ofwat, the UK’s water regulator, is in the middle of an investigation into sewage treatment works by water companies and has opened six enforcement cases.

“What we are witnessing, with sewage being released into the environment, isn’t acceptable,” an Ofwat spokesperson said. “Water companies do not take enough responsibility for their impact on the environment.”

A spokesperson for the Department for Environment, Food and Rural Affairs said the government and regulators have launched the biggest-ever investigation into sewage treatment works.