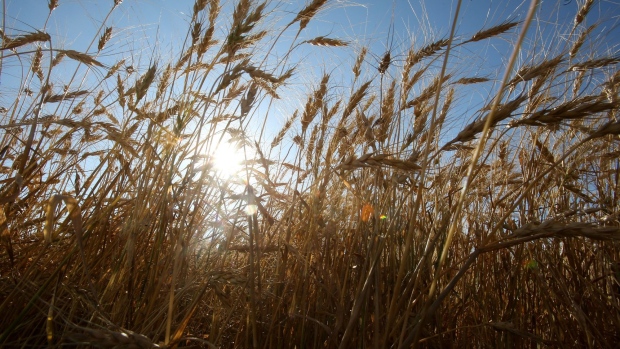 Spring wheat grows in a field before harvest near Brunkild, Manitoba, Canada, on Tuesday, Aug. 11, 2020. Wheat production in Canada, excluding durum, may reach 31.9 million metric tons, up 16% from a year earlier and the biggest harvest ever, according to results of a crop tour of Manitoba, Saskatchewan and Alberta organized by Winnipeg, Manitoba-based FarmLink. , Bloomberg

OTTAWA - The Chamber of Marine Commerce says that demand for wheat, canola and soybeans is pushing grain shipments up by 20 per cent in some of Ontario ports.

The shipping association says that between April 1 and Aug. 31, 5.2 million tonnes of grain passed through a key trade corridor, the Great Lakes-St. Lawrence Seaway.

Thunder Bay Port Authority says that the port is on pace to ship more cargo this year than any other single year since 1997, including an increase of one million tonnes of grain compared with this time last year.

The strong grain harvest has been a bright spot as ports recover from the COVID-19 pandemic, which disrupted supply chains this year.

Overall shipments in the Great Lakes seaway are still down eight per cent compared to this time last year, as iron ore, dry bulk and liquid bulk shipments have all fallen between 10 per cent and 25 per cent.

The Port of Windsor, for example, says its shipments fell 18 per cent this spring as the COVID-19 lockdown halted construction - but now, grain shipments surging there.