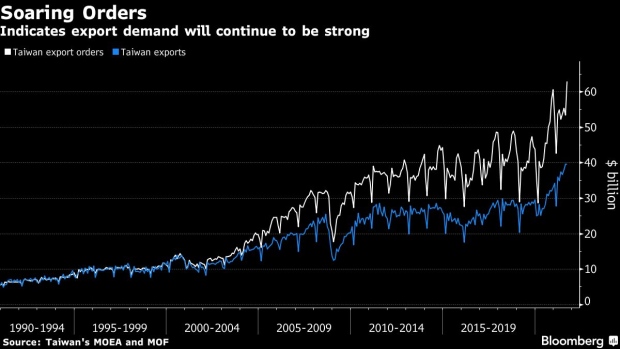 (Bloomberg) -- Global demand for products made by Taiwanese companies defied regional headwinds and predictions of a slowdown as export orders accelerated to a record last month.

Export orders grew 25.7% in September to an all-time high of $62.9 billion, Taiwan’s economics ministry said in a statement Wednesday. Economists had forecast growth to slow to 17%, according to the median estimate in a Bloomberg survey.

While the streak of robust double-digit growth may ease off in the final quarter of the year, officials still expect full-year expansion to come in above 20%. Holiday-season spending in the U.S. and Europe and the release of new consumer electronics would bolster numbers toward the year-end, Huang Yu-lin, director of the ministry’s statistics department, said at a briefing in Taipei.

The continued growth comes despite several headwinds for producers in the region. Power shortages in China forced factories to curb or halt output in September, with the tight energy supply expected to continue through the rest of the year. Despite Beijing’s efforts to increase output from its coal mines, limits on electricity supply to industry could last through the winter months, especially if power is reserved to heat homes.

Apple Inc. is also likely to cut its iPhone 13 production targets for this year by more than 10% due to a shortage of semiconductors, according to people with knowledge of the matter. Chinese plants run by Taiwan’s Hon Hai Precision Industry Co. are the main assemblers of Apple’s flagship smartphone.

Almost a third of the orders were from U.S. companies, followed by Chinese and Hong Kong firms. Orders from Europe surged 53% from a year ago to $13.5 billion.

The stronger-than-expected expansion is expected to be echoed in trade data across the region. South Korea’s exports for the first 20 days of October likely grew about 30%, according to Bloomberg Economics economist Justin Jimenez. That data will be released Thursday.