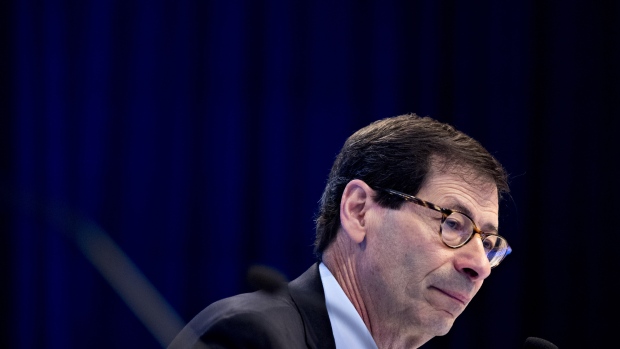 (Bloomberg) -- President Donald Trump has used tariffs as one of his most powerful tools for fighting his trade wars, but he’s also wielding leverage with another weapon: uncertainty.

Through his trade threats and the doubts he has raised about the future of even America’s longest-term economic relationships, Trump has created what could easily be called an uncertainty economy. And it is one that has baffled leading economists.

“I can’t think of when we’ve seen this approach before,” Maurice Obstfeld, the International Monetary Fund’s outgoing chief economist, said in an interview.

The dominant view has long been that uncertainty is bad for growth, impedes investment and unnerves financial markets, Obstfeld pointed out. “No president should want to purposely inject more uncertainty into the decision process of private sector actors,” he said.

Trump’s stated intention has been to use uncertainty as yet another disincentive for companies to invest outside the U.S. and to destabilize the economies of the countries he is negotiating with. Don’t like uncertainty? Build your factory here and help Make America Great Again.

There is little proof so far that approach is paying broad dividends. There is also some evidence that the president is encountering the shortcomings of the tactic.

The most dramatic proof of that came Tuesday with a more than 3 percent fall in U.S. equities that was partly a reaction to questions about the details of the trade truce Trump brought home from his Buenos Aires dinner with Chinese President Xi Jinping.

But beyond Wall Street, a lack of certainty driven in part by Trump has emerged as a drag on business investment decisions from farm states hit by Chinese retaliatory tariffs to industrial hubs.

Not all of it, to be fair, is due to Trump or trade.

In its Beige Book on Wednesday the Federal Reserve added the impact of rising interest rates and labor market constraints to trade as reasons for what it called a waning optimism among businesses around the country. “Multiple contacts have reported putting capital spending plans on hold due to uncertainty in their outlooks” with trade a prominent concern, the Federal Reserve Bank of Minneapolis reported.

“There are dangers and harms from Trump’s use of uncertainty as a tool in trade wars,” said Steven Davis, a professor at the University of Chicago Booth School of Business who helped develop an economic policy uncertainty index. “I’m not aware of another U.S. president trying to weaponize uncertainty. And for good reason -- it harms American interests as well as foreign ones.”

One effect has been a drop in foreign direct investment into the U.S.

In 2017 the long-term capital allocated to the U.S. by foreign investors was 40 percent less than the year before. In the second quarter of this year FDI into the U.S. was actually negative for only the sixth time since the current official data series began in 1982, according to Nancy McLernon, who leads the Organization for International Investment, which represents foreign companies investing in the U.S.

Trump’s threats have prompted some foreign companies to pledge increased investment. Following a meeting at the White House this week to discuss Trump’s looming threat to impose tariffs on imported cars, Volkswagen AG’s CEO Herbert Diess said the company was mulling a second plant in the U.S.

But McLernon said most of her member companies were putting investment decisions on hold rather than rushing to make new ones. That was particularly the case if they were using U.S.-based factories to export to China or other countries caught up in Trump’s trade wars.

“The trade tensions are having the exact opposite effect of what the intention is,” she said.

The trend has been evident with companies like Harley Davidson, which shifted its manufacturing for the European market out of the U.S. because of retaliatory tariffs imposed by the EU. Likewise, BMW has seen exports to China from a South Carolina plant -- its largest in the world -- hit hard by retaliatory tariffs that took effect in July.

In its latest World Economic Outlook, economists at the IMF calculated that the hit to global confidence alone from worsening trade wars would take roughly a tenth of a percentage point off global growth, which is forecast to be 3.7 percent next year. But the broad impact of uncertainty on investment decisions and the global economy remains hard to quantify, according to Obstfeld.

With Trump, “part of the problem is that it seems like nothing really makes the uncertainty go away in a permanent fashion so that businesses can get back to business as usual,” Obstfeld said.

As an example, he cited Trump’s signing of a new Nafta with Canada and Mexico last week and his announcement over the weekend that he would withdraw from the old Nafta. The move was meant to pressure Democrats to ratify his new pact. But it immediately restored a source of uncertainty that’s worried businesses in North America over the past two years.

The same applies to China and Trump’s efforts to strike a deal with Xi. Any deal is likely to take longer than the 90 days that the U.S. and China have agreed to for initial negotiations. Even then a deal may take the form of a patchwork of incremental concessions rather than a single uncertainty-busting package.

"I don’t think that we are going to see a grand bargain with a ribbon tied on it saying that these issues have all been solved," said Wendy Cutler, who served as a senior trade negotiator under both Republican and Democratic presidents and is now at the Asia Society.

One reason may be a truth Trump may be about to discover. In any negotiating room, Cutler said, the cudgel of uncertainty "loses currency over time."

To contact the editors responsible for this story: Simon Kennedy at skennedy4@bloomberg.net, Sarah McGregor, James Mayger