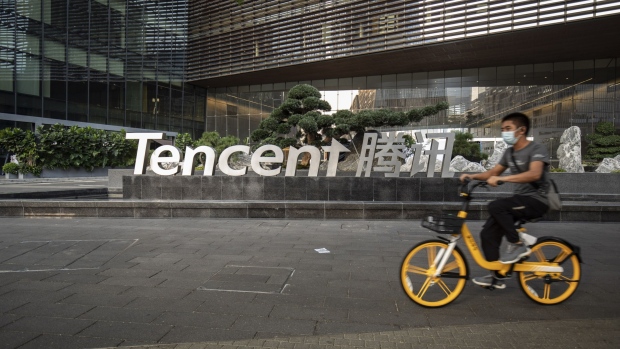 Tencent Holdings Ltd. played down the impact of Beijing’s heightening scrutiny over China’s biggest internet firms, saying a potential revamp of its US$120 billion fintech wing should have little impact on its business.

President Martin Lau acknowledged founder Pony Ma called on regulators recently but said that it was voluntary and part of a series of regular meetings. Executives reiterated that the company has always been cautious and compliant with fintech regulations and it will stick with its normal practice of acquiring minority stakes in Chinese startups, while regulators pore over past deals.

Beijing is widening a crackdown on the country’s largest corporations, fearful of their growing clout after years of relatively unfettered expansion. Tencent’s attempt to allay investor concern over regulatory scrutiny comes after it posted revenue growth that barely met expectations. Regulators are said to be considering forcing the firm to overhaul its promising fintech division in a similar fashion to Jack Ma’s Ant Group Co. This month, President Xi Jinping warned he will go after “platform” companies that amass data and market power, a sign that the internet crackdown isn’t limited to Ant and its backer Alibaba Group Holding Ltd.

“We have always been very focused on compliance and we will continue to operate strictly in compliance with the rules and regulations,” Lau told reporters on a conference call. Any requirements to form a financial holding company will not have an impact on its business, he added.

Top executives on Wednesday repeatedly stressed they will go all out to comply with regulations. Tencent, which has acquired stakes in hundreds of startups over the years, is now going over past investments to ensure they comply with antitrust requirements. It pledged to safeguard user privacy even as it acknowledged the need to heed Beijing’s call to share data.

Led by the People’s Bank of China, the government has proposed establishing a joint venture with tech giants that would oversee the lucrative data they collect, which would mark a significant escalation in regulators’ attempts to tighten their grip over the sector, Bloomberg News reported Wednesday.

“Tencent is trying to reassure investors that its microloan business has substantive differences from Ant,” said Michael Norris, research manager at Shanghai-based consultancy AgencyChina. “While Tencent may avoid the same level of scrutiny as Ant Group, there may be some bumps along the road. Potentially issues could include scrutiny of data collection, or regulatory attention toward promotion and cross-sale of financial products,” he added.

Tencent shares slipped 0.8 per cent before the earnings Wednesday. The stock has dropped about 19 per cent from its January peak, wiping roughly US$180 billion off the valuation of Asia’s biggest company. 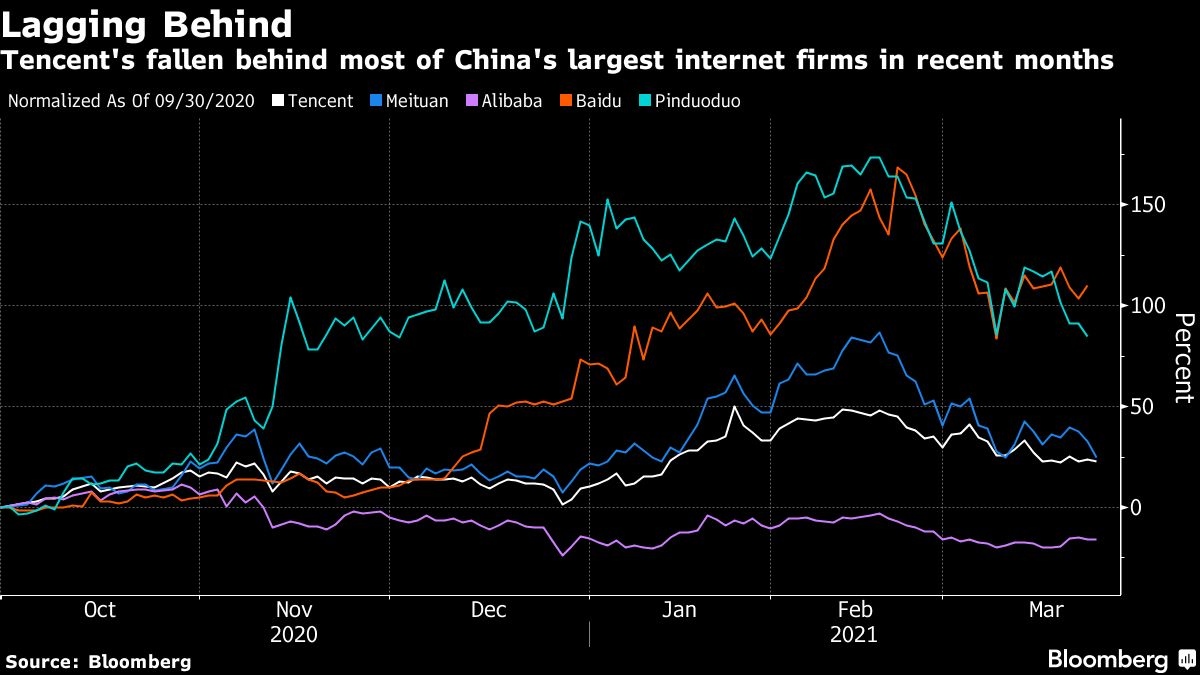 Sales rose 26 per cent to 133.7 billion yuan (US$20.5 billion) in the three months ended December, versus the 133.1 billion yuan average forecast. Net income came in at 59.3 billion yuan, with one-time gains contributing over half its profit. That compared with the 32.9 billion yuan projected.

It’s unclear how far Beijing intends to go in its bid to rein in Tencent and its peers. In the short run, investors will likely focus more on how the world’s largest game publisher could sustain a pandemic-induced entertainment boom, while delving deeper into newer businesses like advertising and payments.

All rely on WeChat, the avenue through which Tencent reaches users and markets products, including its biggest gaming hits like Honor of Kings and PUBG Mobile. Through the mini-program model it championed, WeChat hosted US$240 billion worth of transactions for 400 million daily users last year. Now a new short-video feed inside the all-purpose platform is tasked with helping the Shenzhen-based company fend off arch-rival ByteDance Ltd., which has been luring eyeballs away with TikTok’s China clone Douyin.

Revenues from online games grew by 29 per cent in the fourth quarter -- the slowest pace in about a year -- helped by a surge in international games sales of titles like Peacekeeper Elite and the newly launched Moonlight Blade Mobile. That may spur concerns about the longevity of the pandemic-era global gaming boom. 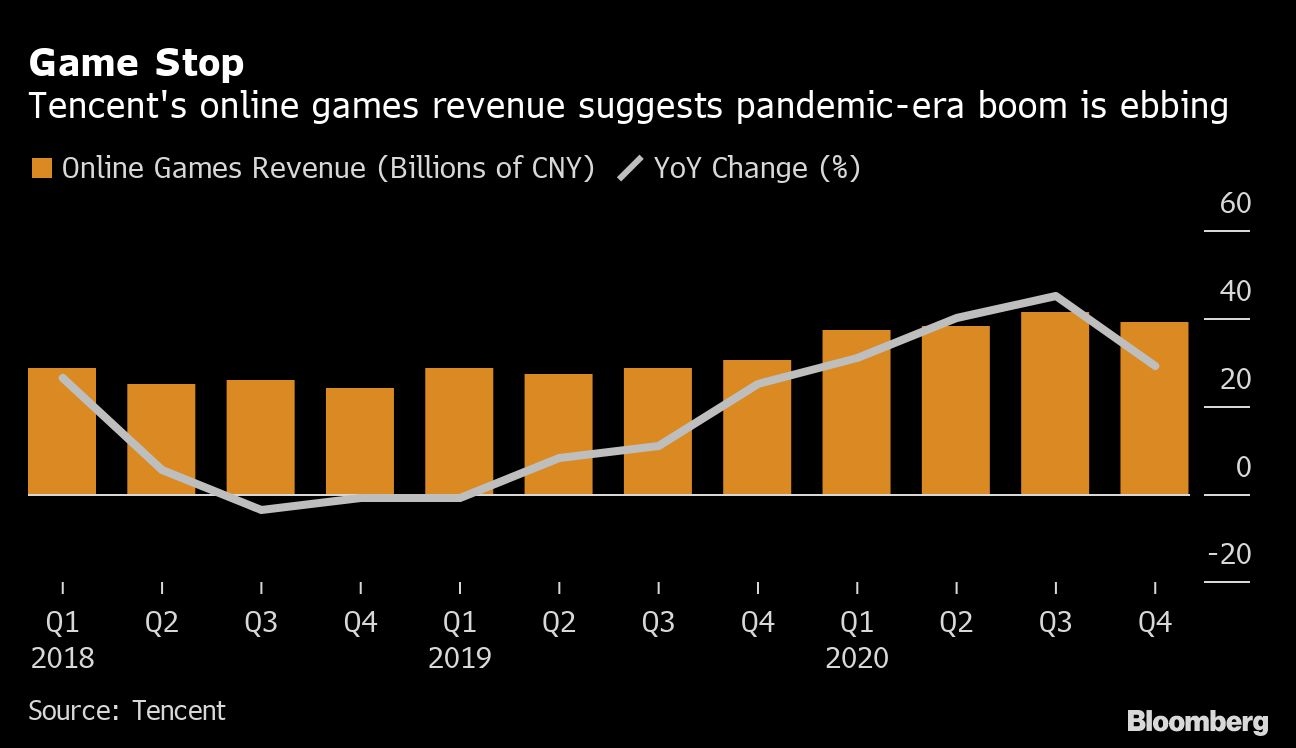 Fintech and businesses -- the division that oversees Tencent’s various money operations as well as cloud -- saw revenue climb 29 per cent, due primarily to growth in payments and wealth management services. Concerns over whether the pace of expansion can continue have increased after people familiar told Bloomberg News financial regulators are now scrutinizing the unit.

Along with Ant, proposed rules to break up market concentration in digital payments and rein in consumer lending online will damage prospects for Tencent’s WeChat Pay and its wider fintech business. Any diktat to fold those operations into a holding company that could be regulated more like a bank would potentially further curb its ability to lend more and expand as rapidly as it has done in recent years.

Tencent’s fintech focus on risk management over scale threatens to grind its growth gears as the company tiptoes through a hair-trigger regulatory landscape fraught with potential hazards.

Regulatory headwinds may extend beyond fintech. Earlier this month, Tencent was fined by the antitrust watchdog for not seeking approval on a past investment, and the company has been sued by parties including ByteDance Ltd. over alleged monopolies in its WeChat platform. Beijing has also called on firms to open up proprietary data in areas like search and social media.