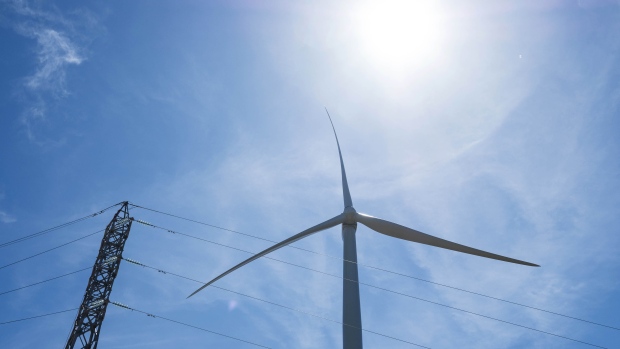 A wind turbine stands beside an electricity pylon in an energy park operated by EDP-Energias de Portugal SA's renewables unit, EDP Renovaveis SA in Maunca, Portugal, on Monday, June 18, 2018. France’s Engie SA is among suitors considering a bid for the 7.3 billion-euro ($8.5 billion) renewables unit of EDP-Energias de Portugal SA, according to people with knowledge of the matter, adding a potential new twist to China Three Gorges Corp.’s pursuit of the company and its parent. , Bloomberg

(Bloomberg) -- China Three Gorges Corp. and State Power Investment Corp. are among the bidders for the 1 gigawatt wind energy portfolio owned by China’s Master Group, according to people familiar with the matter.

The assets of the Ningxia-based Master Group could be valued at about $1 billion, the people said, asking not to be identified because the information is private.

The process, though quite advanced, could be delayed or fall apart or Master Group could decide against proceeding with the sale, the people said.

A representative for State Power Investment couldn’t immediately comment, while calls to the media departments of Three Gorges and Master Group remained unanswered.

China’s state-owned energy giants, flush with cash, are scouting for green deals as the government pushes to reduce emissions and go carbon neutral by 2060. Three Gorges has been buying wind assets and solar parks in Europe, and in August, a group led by the company bought Dubai-based Alcazar Energy Partners.

Founded in 1993, Master Group first started off as a textile and apparel exporting company. The firm later diversified into sustainable energy sectors and now it generates power from wind, solar farms and waste in China, according to its website.

Some privately held energy firms are seeking to sell assets to help improve cash flow as the government struggles with a deficit in its renewable subsidy fund. BloombergNEF expects the shortfall will last until 2049, delaying asset owners’ payments.