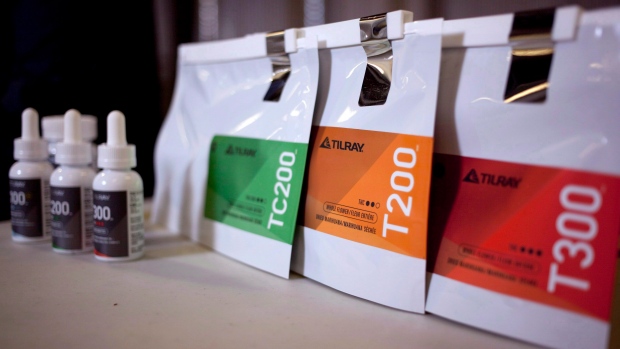 NANAIMO, B.C. - Tilray Inc. expects Canada's cannabis supply could become balanced within the next two years, while the cannabis producer ramps up its production and manufacturing footprint in the country.

CEO Brendan Kennedy said Tuesday that the company now believes Canada will reach a supply balance in the next 18 to 24 months. In mid-March, Kennedy had estimated the country would be in oversupply over the next 18 months.

The change comes as the industry continues to struggle at ramping up production in the current regulatory environment, he said during a conference call with investors after the company released its first-quarter results.

Tilray said it's seeing increasingly high demand in the domestic market and reiterated the company's announcement last week to invest US$32.6 million to increase its Canadian and manufacturing footprint by roughly 18,860 square metres across its three facilities in Leamington and London, Ont., and Nanaimo, B.C.

The company is proud of its most recent quarterly results despite these continued domestic supply constraints, he said.

“We are pleased with our first quarter results which include the first full quarter of adult use market sales,” said Kennedy.

Canada legalized recreational cannabis for adult use on Oct. 17.

The Nanaimo, B.C.-based company, which keeps its books in U.S. dollars, saw its revenue grow 195.1 per cent to US$23 million for the first quarter ended March 31, compared with $7.8 million in the same quarter the previous year.

Tilray says that growth came from cannabis legalization last year in Canada, as well as additional sales from its acquisition of Manitoba Harvest that closed during the quarter and strong growth in medical markets abroad.

The average net selling price per gram decreased to $5.60 from $5.94 in the same quarter the previous year.

Its adjusted net loss, which accounts for non-recurring acquisition related charges, was $25.2 million or 27 cents per share.

Analysts surveyed by Thomson Reuters Eikon expected revenue of $20.2 million and a net loss of $22.8 million or 25 cents per share.

Tilray said the higher net loss was primarily because of increased operating expenses related to growth initiatives, the addition of Winnipeg-based Manitoba Harvest and the expansion of international teams.