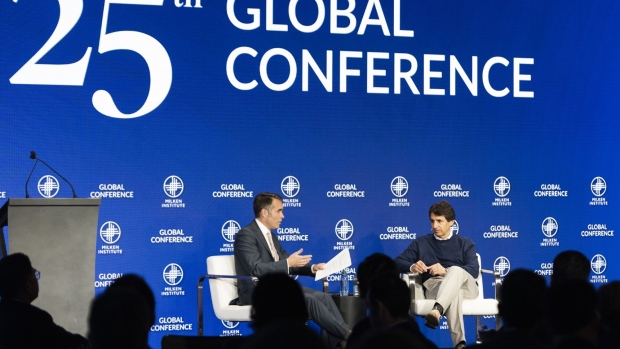 Marc Rowan, chief executive officer of Apollo Global Management LLC, right, participates in a panel discussion during the Milken Institute Global Conference in Beverly Hills, California, U.S., on Monday, May 2, 2022. The event convenes the best minds in the world to tackle its most urgent challenges and to help realize its most exciting opportunities. Photographer: Lauren Justice/Bloomberg , Bloomberg

(Bloomberg) -- As the billionaires and mere multimillionaires flocked this week to Beverly Hills, California, there was no shortage of concerns to discuss: Russia’s invasion of Ukraine, surging inflation, recession risks, supply-chain woes, the lingering pandemic.

Then, as the Milken Institute’s Global Conference was barely underway, European stocks experienced a rare flash crash when a trader on Citigroup Inc.’s London desk made an error inputting a transaction. Executives at the event cited the incident as a symptom of fragility in financial markets, with bank balance sheets stretched in the wake of post-2008 regulations.

“There is more trading going on and markets are bigger, yet banks have less balance sheet,” Jason Brady, president and chief executive officer of Thornburg Investment Management Inc., said on the sidelines of the conference. “You’re going to see more and more crazy things. What you’re seeing is an increasing number of flash crashes across markets.”

The trading shock was followed later in the day by more surprising news: Abortion rights in the U.S., in place for almost a half a century, were poised to be struck down. Already the topic had been a point of discussion at the conference, with Citigroup CEO Jane Fraser asked about divisive cultural issues including the bank’s coverage for out-of-state abortion travel. “We have 220,000 employees -- we listen to them, what are their concerns, what are their needs, and the same with our customers,” she said in a Bloomberg Television interview Monday afternoon.

A few hours later, during a conversation, one financier stopped mid-sentence, not sure the breaking Roe v. Wade story his son had just texted him was even real. On Tuesday, a biotech investor said she skipped several morning panels because friends and colleagues were contacting her about the Supreme Court’s plans.

Even with the myriad concerns both domestic and global -- concerns that were discussed, questioned, fretted over and even, at times, joked about during speeches, panel discussions and meals -- the investors, dealmakers, politicians and power brokers in attendance found time for levity too. It was, after all, the first time that the confab, now in its 25th year, has returned to its standard spring schedule since the pandemic began. After being grounded for much of the Covid-19 crisis, the titans were ready to cut loose.

The Milken Institute’s founder, Michael Milken, and wife Lori were in the front row of the Beverly Hilton’s ballroom Monday night as David Foster, Katharine McPhee, Vonzell Solomon, the Tenors and other performers sang tunes including Whitney Houston’s “I Have Nothing” and Neil Diamond’s “Sweet Caroline,” while Tiffany Haddish offered a surprise rendition of “Proud Mary.”

Before Haddish’s number, Chris Tucker took a turn on stage.

“I’ve never seen so many rich people in my life,” the comedian said. “I’ve never heard people talk money all day long,” he added. “Look at y’all making money right now -- he just crossed his legs, he made a million dollars,” he said, pointing out hedge fund manager Jeffrey Feinberg, seated in the front row.

Michael Milken, who founded the Milken Institute in the early 1990s, worked at Drexel Burnham Lambert in the 1980s before he was convicted for securities fraud, sent to prison and banned from the securities industry for life. Former President Donald Trump pardoned him in 2020.

And the flash crash didn’t stop Citigroup from partying as well. On Monday evening, former Vice Chairman Ray McGuire mingled with bank clients on a nearby rooftop terrace, with sushi and chicken sliders available for snacking. Guests departing the Citigroup-hosted event were given water with electrolytes to fight potential hangovers.

Even with all the partying, global concerns were inescapable. One London-based mezzanine-debt investor who’s been to several Milken conferences said the mood seemed notably more somber this year, given market volatility and recession expectations, and that it felt harder to revel in the excess than in past years.

One senior Wall Street executive, during a conversation in the hallways of the Beverly Hilton, said industry leaders have been receiving regular classified security briefings and are fielding warnings about escalating cyber threats against the financial system. Even poolside -- a site for relaxation much of the year, but a place for Apollo co-founder Leon Black to meet with Trian Partners’ Nelson Peltz and Ed Garden during Milken -- talk turned to Ukraine.

At the cabanas, one financier who’s been in the industry for decades and has attended several past Milken events said he’d just come from a meeting where former oil tycoon Mikhail Khodorkovsky talked about the decade he spent jailed, the steps Russian President Vladimir Putin would need to take to implement a nuclear attack and the likelihood of defection among his deputies. The financier called it one of the most interesting conversations he’s ever had.

As in past years, activists descended on the Milken conference as well to seek attention for their causes. Speakers at a social-impact panel Tuesday morning, entitled “Where Values Meet Value: Doing Well by Doing Good,” had to contend with the sound of United Steelworkers protesters outside. “Hey, Chevron, you’re no good, treat your workers like you should,” they chanted, demanding better contracts.

And the Covid-19 pandemic and its attendant infection risks lingered as well. Still, attendees largely went maskless, with only a few people in one room of 50 using face coverings. The Milken Institute did provide masks to those wanting them. And Michael Milken himself wore one as he walked around the conference -- one of the few people to do so.