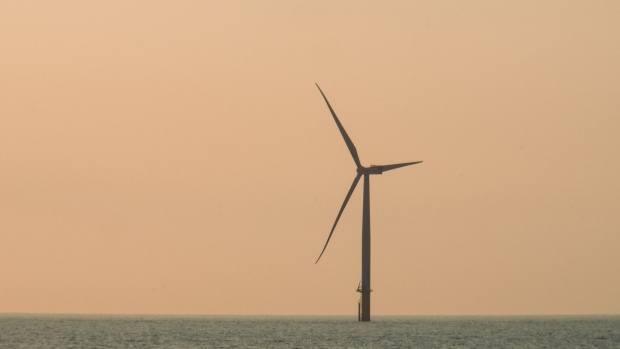 An offshore wind turbine, operated by Swancor Holding Co., stands in the Taiwan Strait off the coast of Miaoli County, Taiwan, on Thursday, July 26, 2018. Since a disastrous 2011 reactor meltdown in Japan, more than 1,400 miles (2,250 kilometers) away, Taiwan has rewritten its energy plans. President Tsai Ing-wen ordered all of the country's nuclear reactors to shut by 2025. Photographer: Billy H.C. Kwok/Bloomberg , Bloomberg

Total SE will team up with Macquarie Group’s green bank to develop more than 2 gigawatts of floating wind farms off South Korea, the latest push by the French oil and gas giant to diversify into clean energy.

Total and European peers such as Royal Dutch Shell Plc and BP Plc have vowed to reduce their exposure to fossil fuels and trim emissions as governments, consumers and investors demand increased efforts to tackle global warming. Floating wind parks at the scale planned by Total -- dwarfing current sites -- will be key to bringing down the cost of the emerging technology.

The French major and Macquarie’s Green Investment Group will develop five floating wind farms off the eastern and southern coasts of South Korea, Total said in a statement on Tuesday. They plan to start building the first 500-megawatt project by the end of 2023. That compares with the 30 megawatts of capacity at Equinor ASA’s Hywind site off Scotland, the biggest operating floating wind project so far.

The plan is “in line with Total’s strategy to profitably develop renewable energy worldwide and contribute to our net-zero ambition,” Chief Executive Officer Patrick Pouyanne said in the statement. “Thanks to its extensive experience in offshore projects, in cooperation with many Korean shipyards, Total is particularly well positioned to contribute to the successful development of this new technology.”

Developers have recently started to test large floating wind turbines, aiming to install them in areas that lack shallow waters, where traditional offshore turbines can be anchored to the seabed. Total itself took a majority stake in a floating wind project off Wales this year, reflecting its commitment to invest in the technology while tapping its experience developing oil and gas offshore.

Total has also stepped up spending on renewable energy more broadly, with investments this year in large solar developments in India and Qatar, a giant wind farm in the North Sea, and growth in clean power in Spain and France. The company aims to have stakes in at least 25 gigawatts of renewable generation capacity in 2025, up from more than 5 gigawatts currently.

Total didn’t discuss funding of the Korean wind farms in its statement.