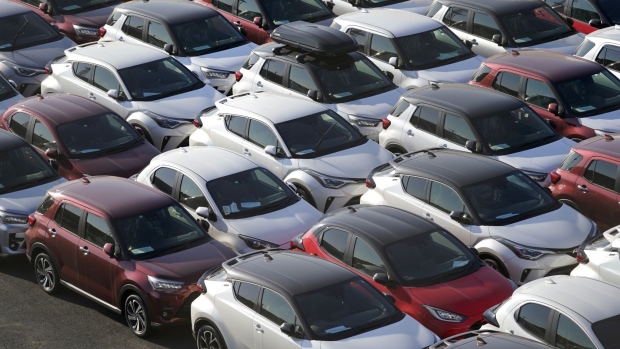 Toyota Motor Corp. vehicles bound for shipment at a port in Yokohama, Japan, on Saturday, Oct. 31, 2020. Japan’s exports fell by the smallest margin in seven months in September in another sign that the pandemic’s hit on global trade is easing. Photographer: Toru Hanai/Bloomberg , Bloomberg

Shares in the world’s top-selling carmaker fell as much as 2.3% after it kept its forecast for 2.5 trillion yen ($22.9 billion) for the fiscal year through March, compared with analysts’ average projection for 2.95 trillion yen. Operating profit for the April-June quarter was a record 997.5 billion yen, topping analysts’ prediction for 759 billion yen.

Toyota’s been on a tear since emerging from last year’s pandemic-spurred automotive slowdown. A shortage of automotive chips has hindered some rivals’ ability to capitalize on strong global demand for cars, but Toyota has remained relatively unimpaired due to its supply chain savvy and a strong stock it keeps of key components such as semiconductors.

“It’s clear that everyone is disappointed by Toyota not upgrading its outlook,” said Koji Endo, an analyst at SBI Securities Co.

The forecast wasn’t upgraded due to the lingering chip shortage and Covid spread issues, Toyota said, adding that it’s difficult to provide a forecast of when the semiconductor shortage will improve.

Though conditions have improved from the early months of 2020 when the pandemic shut factories and showrooms across the globe, the months ahead remain cloudy with new Covid variants again hampering production and semiconductor supplies predicted to remain tight into 2022.

Toyota’s unchanged full-year forecast reflects a “not letting your guard down” stance that’s typical for the carmaker, aacording to Bloomberg Intelligence analyst Tatsuo Yoshida. “Barring something quite unexpected happening with regard to material prices, Covid or semiconductors, upward revision is a strong possibility in the second quarter,” Yoshida said.

For the recent quarter, operating profit increased in all regions from a year earlier due to strong sales volumes, the company said, with about 100,000 units of output lost due to factors including the chip shortage and Covid-related disruptions. That level of production cuts was already included in previous forecasts, according to Toyota.

Toyota shares erased some of their decline, and were down less than 1% by the close of trading on Wednesday. The stock is up 25% this year.