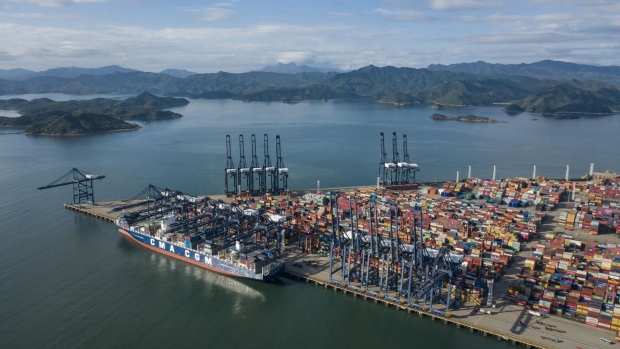 It was a key promise on the campaign trail, and now Donald Trump is set to deliver — at least somewhat.

The U.S. president is poised today to sign a “phase one” trade deal with China that for the first time would punish Beijing if it fails to make good on pledges related to its currency, intellectual property and trade balance, while unleashing a $200 billion Chinese buying spree in agriculture and energy.

The move is a win for Trump at a crucial time. The Senate is on the cusp of starting its impeachment trial, while tensions with Iran have sparked concern in the Middle East and criticism from within his own party.

It’s also good news for President Xi Jinping. He’s managed to stop the bleeding on a damaging trade war, allowing him to concentrate on China’s slowing economy and ongoing protests in Hong Kong.

Now, as Shawn Donnan, Jenny Leonard and Justin Sink write, the big question for Trump is whether the pact actually rewires the relationship between the world’s biggest economies. It’s unclear when talks will start on phase two, which will tackle much thornier issues.

And if voters don’t see any gains, Trump could be in trouble come November.

Foreign policy vision | The top Democratic presidential candidates used the final debate before the Iowa caucuses to make their case to be commander-in-chief, less than two weeks after Trump ordered the killing of a top Iranian general. The six contenders argued for a reduced U.S. role in the Middle East after two decades of troops in Iraq.

Thrown off course | After the failure in Moscow to coax Libya’s warring factions into signing a broader truce, focus turns to a planned meeting in Berlin this weekend. Samer Al-Atrush, Ilya Arkhipov and Selcan Hacaoglu provide an inside take on how the talks in Russia fell apart. The backdrop to all this is Russia and Turkey’s combined push for influence in the Middle East and North Africa — at the expense of the U.S.

Pressuring Iran | Germany, France and the U.K. have started formal action against Iran for breaching restrictions on uranium enrichment in the 2015 nuclear accord. European diplomats say in private this is about calling Tehran’s bluff, in a bid to force open a new diplomatic front that could salvage the deal. They’ve been struggling to hold it together since Trump pulled the U.S. out 20 months ago.

Impeachment mechanics | Senators are girding for a lengthy impeachment trial that could leave a cloud over Trump’s Feb. 4 State of the Union address and disrupt Democratic presidential campaigns. Speaker Nancy Pelosi will name impeachment prosecutors today, the House will vote on them and formally transmit the two articles to the Senate. Republican senators are hashing out the procedures that will govern the trial.

Loosening up | Xi has made overhauling China’s residency system known as hukou a key goal. The impact of reforming the decades-old policy — which determines where people can live and work, where their children go to school, and even influences who they marry — could be huge, as part of an urbanization strategy that will foster the emergence of new megacities in China’s interior.

Tell us how we’re doing or what we’re missing at balancepower@bloomberg.net.And finally ... Africa has been late to the tall-building party, with Asian and Middle East countries boasting nine of the 10 highest skyscrapers. But now South Africa, Ivory Coast and Morocco are getting in on the act. Africa’s current leader is the Leonardo in Johannesburg at 234 meters (768 feet). A coming tower in Rabat is targeted at 250 meters, while one in Abidjan will peak at 283 meters. But it will still be about a third of the height of the big gun — the Burj Khalifa in Dubai.

--With assistance from Karen Leigh and Daniel Ten Kate.

To contact the editor responsible for this story: Rosalind Mathieson at rmathieson3@bloomberg.net, Karl Maier