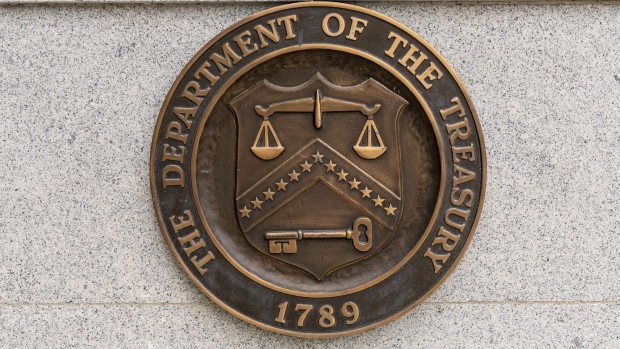 The U.S. Treasury Department building in Washington, D.C., U.S., on Friday, July 2, 2021. The Biden administration and global allies scored a major victory yesterday in their push for a more balanced international corporate tax system, but still face multiple significant obstacles to completing an ambitious plan that has been years in the making. Photographer: Joshua Roberts/Bloomberg , Bloomberg

(Bloomberg) -- Treasury auction size cuts are likely coming, but there’s no agreement among Wall Street dealers on when.

Of the 24 primary dealers of U.S. government securities, just three expect smaller auctions during the August-October quarter, details on which are slated to be unveiled Wednesday at 8:30 a.m. in Washington.

More expect the cuts to start in the November-January period, and for this week’s quarterly refunding announcement to set the stage with guidance on the government’s thinking.

Other forecasters see stable auction amounts until February, and some -- including UBS Group AG -- expect no changes until later in 2022.

The upshot: There’s a yawning gulf between the high and low ends of expectations for Treasury coupon supply over the next year. For example, Barclays Plc predicts coupon supply totaling $283 billion in May 2022, while UBS expects $352 billion. The discrepancy is concentrated in the 2- to 7-year area. At Barclays, the forecast for the 5-year is $43 billion; UBS’s is $59 billion.

UBS strategist Michael Cloherty says auction sizes are likely to be maintained for a longer time because “the continued threat of the pandemic on the economy and on fiscal needs” may prolong budgetary uncertainty after current packages are approved, continuing into 2022.

The following are predictions for auctions of fixed-rate coupon-bearing notes and bonds by dealers who provided detailed forecasts for the coming three quarters. Each dealer appears only in the table corresponding to when it expects size cuts to begin; their forecasts for subsequent periods don’t appear. Sizes are in billions of dollars, with most recent sizes in parentheses. Two- to seven-year auctions are monthly new issues, while 10-, 20- and 30-year entries are a new issue with two reopenings.

Regarding issuance of Treasury Inflation-Protected Securities during the August-October quarter, the 21 dealers who provided forecasts uniformly expect an $8 billion 30-year reopening in August and a $14 billion 10-year reopening in September. For the 5-year new issue in September, nine dealers expect $18 billion, unchanged from the April new issue; 11 expect an increase to $19 billion, and Goldman Sachs Group Inc. expects an increase to $20 billion.