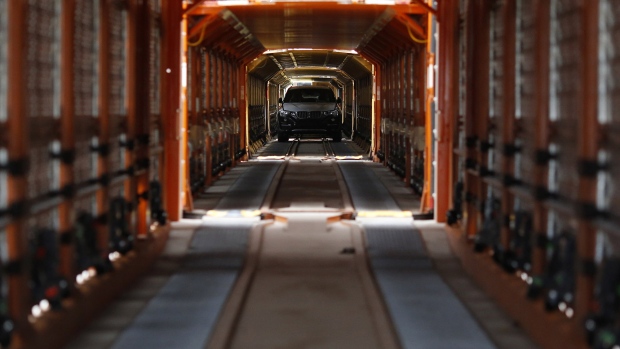 A Bayerische Motoren Werke AG (BMW), assembled in the U.S., sits in a rail car at the Port of Charleston in Charleston, South Carolina, U.S., on Tuesday, Oct. 4, 2016. , Luke Sharrett/Bloomberg

President Donald Trump on Friday declared that imported cars represented a threat to U.S. national security but announced a delay in imposing tariffs on imported vehicles and parts from the European Union, Japan and other nations for 180 days to pursue negotiations.

The move avoids opening another front in Trump’s tariff battle with some of America’s key trading partners, yet it also sets the stage for high-stakes talks that are likely to be a persistent irritant in relations.

The Commerce Department submitted the conclusions of a probe into imports of cars and parts to the president in February. Trump had until Saturday to decide how to respond, including whether to impose tariffs or defer any action.

In a proclamation released in Washington, Trump said he agreed with the conclusion by Commerce that imports of cars and certain auto parts harm national security, pointing to the declining markets share of "American-owned" producers since the 1980s. He also set a goal of reducing imports of cars, arguing that reduced sales of domestic brands had undermined U.S. automakers’ ability to invest in research and development.

“Domestic conditions of competition must be improved by reducing imports,” the proclamation stated.

The order softened language contained in an earlier draft seen by Bloomberg, which had sought to reach “agreements that limit or restrict” exports of autos and auto parts from the EU, Japan and other nations -- suggesting the U.S. could seek to impose quotas.

Instead, the White House order on Friday had less pointed wording, directing the U.S. Trade Representative Robert Lighthizer to pursue negotiations of agreements “to address the threatened impairment of the national security.”

Though the wording is less provocative, it still implies a goal that neither the EU nor Japan -- both of which the U.S. is in broader trade negotiations with -- is likely to accept.

The European Commission on Friday rejected the idea that EU auto exports to the U.S. posed a security threat. “The EU and the U.S. are security partners” and “therefore neither U.S. nor European products can represent a security threat to the other side,” the commission said in a statement.

In a sign of what are likely to be contentious negotiations ahead, the EU’s trade commissioner, Cecilia Malmstrom, also tweeted that the bloc would not accept any limits to trade that violated World Trade Organization rules such as quotas.

Trump renewed his complaints Friday about EU barriers to trade. The EU "treats us, I would say, worse than China, they are just smaller. Can you believe it?,” he said at an event. “They have trade barriers. They don’t want our farm products. They don’t want our cars. They send Mercedes-Benz in here like they are cookies. They send BMWs here. We hardly tax them at all."

Trump’s proclamation annoyed foreign-owned automakers with major operations in the U.S. by highlighting the contributions to U.S. national security of “American owed" companies.

“Today’s proclamation sends a message to Toyota that our investments are not welcomed, and the contributions from each of our employees across America are not valued,” Toyota Motor Corp. said in a statement. The company has 10 manufacturing plants in the U.S. and is building a new US$1.6 billion factory in Alabama along with Mazda Motor Corp. that’s scheduled to start production in 2021.

The order indicated that Canada, Mexico and South Korea would not face any tariffs because they had already negotiated deals with the Trump administration. “I have also considered the renegotiated United States-Korea Agreement and the recently signed USMCA, which, when implemented, could help to address the threatened impairment of national security,” it said.

Canada and Mexico negotiated side letters to the U.S.-Mexico-Canada Agreement that spare them from new U.S. duties on cars, subject to a cap. The U.S. renegotiated a trade deal with South Korea last year, which included a provision to double the number of cars U.S. automakers can sell in the Asian nation without restrictions from local safety standards.

Commerce started the investigation last year under Section 232 of a 1960s trade law, the same provision the administration used to slap tariffs on steel and aluminum. The car probe covered imports of vehicles including SUVs, vans and light trucks, as well as auto parts.

The delay may avoid a major escalation of tensions with U.S. allies as the administration faces a deepening trade war with China, which is disrupting supply chains and casting a cloud over the global economy.

Companies and governments from Europe to Asia have warned Trump that tariffs on car imports would hurt the U.S. economy and disrupt the global auto industry.

“Current tariffs have added cost, reduced the industry’s global competitiveness, and created tremendous uncertainty resulting in slowed investment and growth,” said John Bozzella, the president of Global Automakers, trade group that represents automakers and suppliers based outside the U.S., in a statement Thursday.

The National Automobile Dealers Association estimates that the tariffs would add as much as US$2,270 to the cost of U.S.-built cars and US$6,875 to the cost of imported cars and trucks.