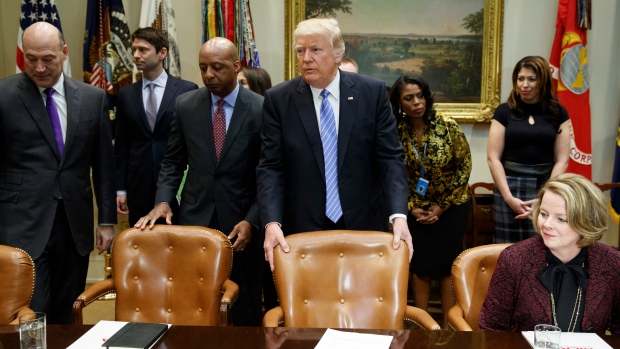 President Donald Trump arrives for a meeting with retail industry leaders in the Roosevelt Room of the White House in Washington, Wednesday, Feb. 15, 2017. , The Canadian Press

WASHINGTON -- President Donald Trump met Wednesday with the CEOs of large retailers like Target and Best Buy, who have a built-in concern: They're worried about a possible border tax on imported goods.

The president has provided scant details about his own tax overhaul, but said people will "love" his planned tax reforms. He assured retail CEOs Wednesday that tax rates would be lowered and simplified in a "massive" plan that "will be submitted in the not too distant future."

Retailers called the hourlong meeting positive and productive, though they offered few details.

During the public portion of the meeting, Trump provided no insight as to whether he still intends to levy a border tax on imports. Trump has threatened a border tax in order to protect U.S. factory jobs. House Republicans have separately proposed a border adjustment tax system on imports that would help to lower overall corporate tax rates, a policy the Trump administration has at times dismissed and also considered as a viable way to help pay for wall on the southern border with Mexico.

Retailers have warned that forms of a border tax could raise prices as much as 20 per cent for consumers on items from gas to food to clothing.

Nearly all of those items that U.S. shoppers buy are either wholly or partly produced overseas, where production is cheaper. And with online competition and shoppers trained to find the best deals, U.S. retailers haven't had the power to raise prices on many goods for several years.

Target said they had a good discussion "about policies that would promote economic growth and job creation," and also talked about the border tax proposal, which Target called a "priority" issue since it "will raise prices for American families on everyday essentials."

"At Target, we believe that anything that raises prices for families is not a good idea for America," the company said.

AutoZone CEO Bill Rhodes, who is also chairman of the Retail Industry Leaders Association trade group, called the meeting "positive and productive" about the significant role the retail industry plays in the national economy.

"We stressed the importance of taking a thoughtful approach to tax reform for both individuals and corporations," Rhodes said.

After the meeting, the CEOs met with several lawmakers on Capitol Hill.