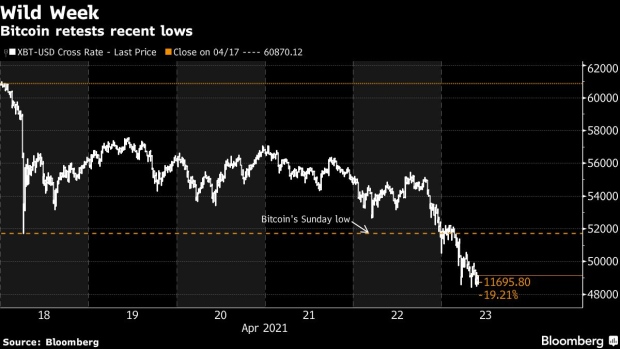 Mining rigs mine the Ethereum and Zilliqa cryptocurrencies at the Evobits crypto farm in Cluj-Napoca, Romania, on Wednesday, Jan. 22, 2021. The world’s second-most-valuable cryptocurrency, Ethereum, rallied 75% this year, outpacing its larger rival Bitcoin. , Bloomberg

(Bloomberg) -- Turkey’s cryptocurrency investors were dealt another blow after a second big exchange collapsed in as many days, prompting the country’s financial crimes watchdog to open a probe.

Cryptocurrency exchange Vebitcoin said it would halt operations, citing deteriorating financial conditions. Turkey’s Financial Crimes Investigation Board said it has blocked the company’s accounts and opened an investigation against Vebitcoin and its executives.

Vebitcoin is Turkey’s fourth biggest exchange with close to $60 million in daily volumes, according to CoinGecko.com which tracks data on price, volume and market value on crypto markets. More than half of this volume came from Bitcoin, which dropped 19% this week, heading for its worst week in almost two months.

Vebitcoin’s collapse comes days after Thodex halted operations and its 27-year-old founder fled the country. Thodex had about 390,000 users according to a lawyer for the victims and losses could be as high as $2 billion, according to Turkey’s Haberturk newspaper.

The two exchanges were part of the cryptocurrency boom that has drawn in legions of Turks seeking to protect their savings from rampant inflation and an unstable currency. Inflation hit 16.2% in March, more than three times the central bank’s target, and the lira has weakened more than 10% against the dollar this year -- its ninth consecutive year of losses.

The daily volume of trade in Turkish crypto markets was close to $2 billion for Friday, according to data from CoinGecko.com. The boom has drawn attention from regulators.

Turkey’s Central Bank has banned cryptocurrencies as a form of payment from April 30, and the country has prohibited payment and electronic money institutions from mediating money transfers to cryptocurrency platforms.

Central Bank chief Sahap Kavcioglu said more regulations are in the pipeline in a televised interview on Friday. “We are working on regulations in terms of cryptocurrency,” he said. “There are disturbing money outflows to outside of Turkey via cryptocurrencies.”