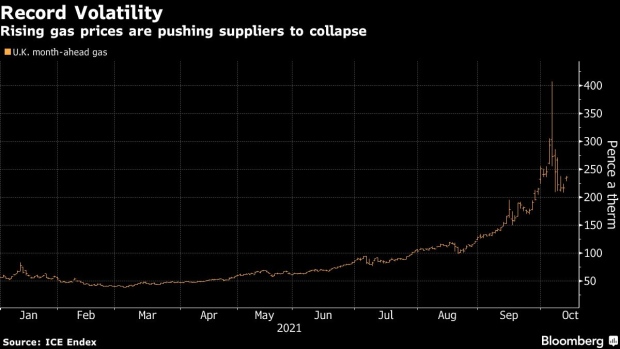 (Bloomberg) -- Two energy suppliers with about 250,000 customers have collapsed in the latest escalation in the U.K.’s energy crisis.

The unprecedented volatility in power and natural gas markets last week has added to pressure already on suppliers as surging prices push them to breaking point. The U.K.’s Business Secretary Kwasi Kwarteng warned last week that more suppliers would likely go out of business. The latest failures show that the crisis is still getting worse.

The customers of the two failed suppliers will be transferred to new companies, according to the country’s energy regulator Ofgem. Finding a replacement is becoming more difficult as most of the larger suppliers have already taken on extra customers and say they are stretched as far as they can go without financial help from the government.

The price of gas has more than quadrupled this year. Many small suppliers haven’t fully hedged, meaning they have to buy expensive gas and power in the market. At the same time, they can’t pass on most of those added costs to their customers because of fixed contracts and a government price cap for some tariffs.

Customers are automatically reallocated through a process known as the supplier of last resort, under which Ofgem chooses another company to provide energy. So far the process has been working. But if a big supplier fails then the regulator will appoint a special administrator to limit the risk of market chaos created by trying to quickly transfer a large number of customers to another supplier.