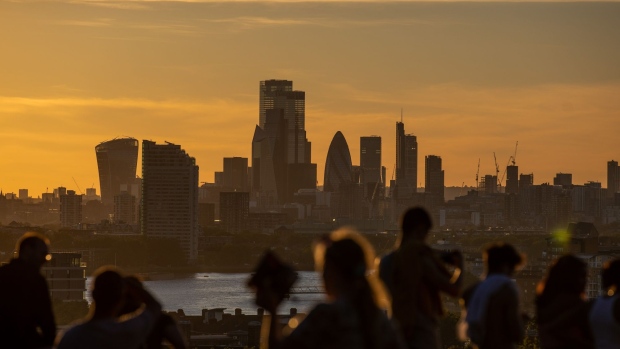 Pedestrians watch the sun set over skyscrapers on the skyline from Greenwich Park in London, U.K., on Thursday, July 30, 2020. London's best offices are forecast to plunge in value by as much as 15% this year as the coronavirus hits rents and investors' appetite for real estate. Photographer: Simon Dawson/Bloomberg , Bloomberg

(Bloomberg) -- The U.K. is still in the eye of the coronavirus storm and more challenging times may yet follow, according to an influential business chief who urged the government to take further steps to support corporate Britain.

The pandemic and lockdown thrust the economy into the worst slump in Europe, but support rolled out by Chancellor of the Exchequer Rishi Sunak staved off the worst effects of the slowdown by preserving more than 9 million jobs. But according to British Chambers of Commerce Director General Adam Marshall, the U.K. faces a moment of renewed danger as the winding down of that support threatens to coincide with a potential winter resurgence of the virus.

“We’ve been through the first wave of the storm, which is damaging and difficult and distressing, but in fact it’s the second leg of a hurricane or a typhoon that often causes the most damage,” Marshall said Thursday in an interview. “That’s what we have ahead of us.”

It’s another reminder of the balancing act facing Sunak as he determines how to keep up government support for businesses and workers while also containing runaway spending that’s pushed the U.K. debt over 2 trillion pounds ($2.6 trillion) for the first time. The chancellor has repeatedly said that the government’s flagship wage support program must end at the end of October.

Marshall’s voice carries weight, because as the head of one of the country’s biggest business lobby groups, he represents tens of thousands of companies around the U.K., employing almost 6 million people. He and his officials hold regular meetings with the chancellor an others in the Treasury.

Sunak has promised a budget in the coming months, and Marshall called for a firm date and for the chancellor to be “bold” in his announcements.

“It is not yet time for Treasury orthodoxy to reassert itself,” Marshall said. “We have always argued that the U.K.’s market credibility depended on its strong fiscal position, but our country, like the rest of the world, is in a pretty unprecedented situation right now and there is a period of time during which it will be important to continue to offer significant support to business and to economic growth.”