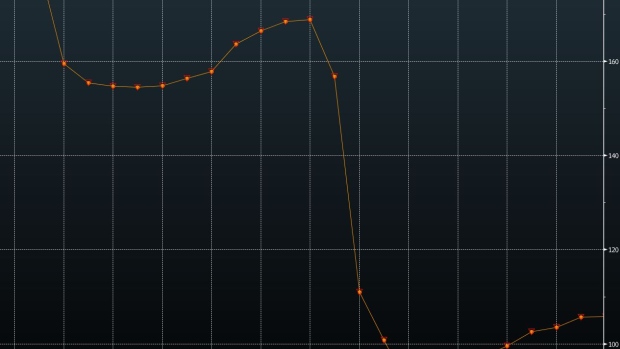 A worker fixes pipes from a fuel tanker to underground tanks at a BP petrol station in Ruislip, U.K., on Monday, Oct. 4, 2021. U.K. drivers head into a second working week of fuel shortages, with the threat of higher prices adding to pressure as the government deploys army personnel to ease the crunch. Photographer: Chris Ratcliffe/Bloomberg , Bloomberg

(Bloomberg) -- High gas prices in the U.K. are going to endure for longer than expected and will cause pain for consumers and politicians for at least the rest of this year, according to the body that represents energy companies.

Prices are more than three times higher than usual for this time of year and though a decline is expected in April when the heating season ends, it will be smaller than usual. The timing of that dip, coinciding with an expected increase of about 50% in the country’s energy price cap, is going to be politically challenging, said EnergyUK Chief Executive Officer Emma Pinchbeck.

Though futures suggest a drop in gas prices during the summer months when demand usually declines and storage is refilled, they will still be higher than usual.

High prices have “become a more enduring issue than we might have first imagined,” Pinchbeck said in a media briefing. “Politically it’s an enormous challenge to explain why bills are going up as gas goes down,” she added, referring to the changes coming in April.

The price cap, which protects 15 million households, is currently set every six months and is based on prices in the previous period, meaning there is a lag between market moves and the level of the cap. Regulator Ofgem is looking at ways it can change the way it is calculated.

The government is weighing options for how it can help lessen the burden of higher bills for consumers. The price cap is expected to rise to about 2,000 pounds ($2,730) in April from 1,277 pounds now. Cornwall Insights Ltd. expects a further increase when the price cap is reset again for the period from October onward.

The price cap is tied to wholesale prices and will jump in line with soaring prices. Suppliers are losing between 400 and 600 pounds for each customer they supply on the price cap, according to Pinchbeck. That’s in part because of the cost of buying energy in the market.

The government is running out of time to lessen the impact of wholesale costs. Proposals being considered include setting up a fund, that could be as big as 20 billion pounds, to help energy companies spread out the price increases they pass on to consumers. The money could come from private or state-backed loans but needs to be agreed before before Feb. 7, when Ofgem announces the new ceiling for what firms can charge some customers from April.

“It’s untenable that the government doesn’t do something on bills,” Pinchbeck said. “We’re very worried about customers.”

Read more: The U.K. Is Two Months Away From a Brutal Cost-of-Living Crisis