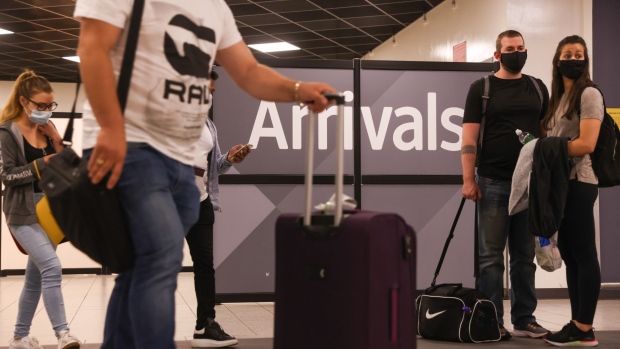 Travelers pass through the arrivals area at London Luton Airport in Luton, U.K., on Wednesday, Aug. 4, 2021. The French government redoubled its efforts to get the U.K. to reverse Covid-19 restrictions on visitors from France, ahead of a British reassessment of those rules later this week. Photographer: Chris Ratcliffe/Bloomberg , Bloomberg

(Bloomberg) -- Just days before the U.K. will host 197 countries for key global climate change talks, Chancellor of the Exchequer Rishi Sunak promised to cut taxes on gasoline and flying.

In his budget speech on Wednesday, Sunak said he wanted to encourage more people to take short-haul flights within the U.K., and so would reduce air passenger duty for those journeys to 6.5 pounds. That is expected to help 9 million passengers.

The policies are likely to anger environmental campaigners pushing the U.K. to accelerate its transition to net zero emissions.

To offset any increased carbon emissions, the Treasury also said it would increase fuel duty for long-haul flights. Those flying up to 2,000 miles in economy class will pay 13 pounds per flight, rising to 87 pounds for those flying 2,000 to 5,000 miles. Above 5,000 miles, the duty will be 91 pounds.

“Right now, people pay more for return flights within and between the four nations of the United Kingdom than they do when flying home from abroad,” Sunak said.

The Chancellor also confirmed he would freeze fuel duty for the 12th year in a row, because fuel prices are at their highest level in eight years.

However, Sunak also announced that in 2024-25, the U.K. would reinstate its commitment to spend 0.7% of national income on overseas aid, in line with other Group of Seven countries.

He had cut it to 0.5% during the pandemic, leading to criticism from poor nations and lawmakers in his own Conservative party that the U.K. was failing to show international leadership on helping the world tackle climate change.