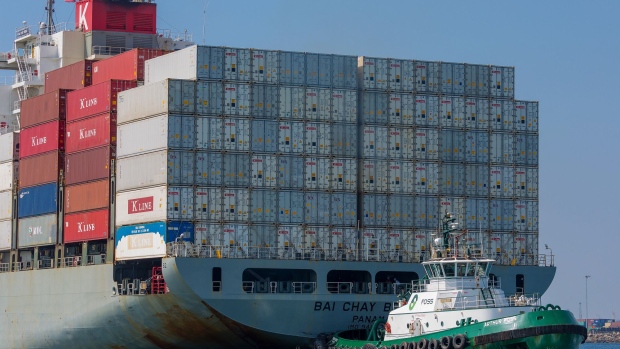 A tugboat guides the Kawasaki Kisen Kaisha Ltd. Bai Chay Bridge cargo ship into the Port of Long Beach in Long Beach, California, U.S., on Wednesday, April 4, 2018. The U.S. trade deficit widened by more than forecast to a fresh nine-year high in February amid broad-based demand for imports, ahead of Trump administration tariffs that have raised the specter of a trade war. Photographer: Tim Rue/Bloomberg , Bloomberg

(Bloomberg) -- The U.S. trade deficit widened to a record in August, reflecting a pickup in the value of imports of consumer goods and industrial supplies.

The gap in trade of goods and services increased 4.2% to $73.3 billion, from a revised $70.3 billion in July, according to Commerce Department data released Tuesday. The median estimate in a Bloomberg survey of economists was for a shortfall of $70.8 billion.

The value of goods and services imports rose 1.4% to a record $287 billion in August. The U.S. imported $3 billion more consumer goods during the month, mostly due to pharmaceuticals and toys, games and sporting goods. Exports climbed 0.5% to $213.7 billion.

While a surge in household demand for merchandise earlier this year and steady business demand for equipment have left inventories extremely lean, the reopening of the economy is gradually boosting demand for services.

At the same time, domestic producers have struggled to ramp up output because logistics bottlenecks have knocked global supply chains out of sync, resulting in backups at ports, a wide range of materials shortages, and soaring shipping rates.