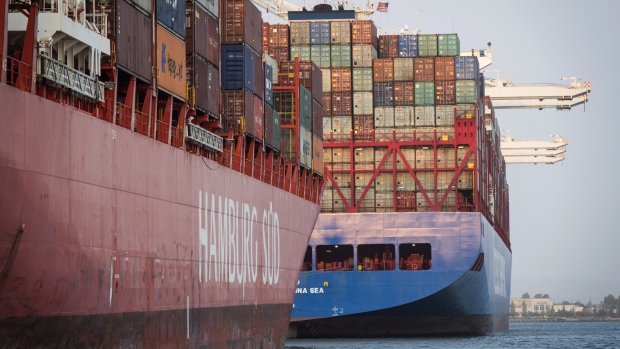 The U.S. trade gap narrowed in November to the smallest in three years as exports advanced amid a thaw in the trade war with China, while imports fell to the lowest since 2017.

The overall U.S. deficit in goods and services shrank to US$43.1 billion in November from US$46.9 billion the prior month, according to data released Tuesday by the Commerce Department. The median estimate of economists surveyed by Bloomberg called for a shortfall of US$43.6 billion.

The report indicates trade is on track to contribute to fourth-quarter economic growth after having weighed on gross domestic product for the previous two periods, though the shift reflects more of a drop in imports than a gain in exports.

The U.S. and China announced a phase-one accord in mid-December following agreement in October on the broad contours, at least temporarily calming fears of an escalating trade war. The deal will involve reduced tariffs in exchange for more Chinese purchases of American farm goods such as soybeans and pork as well as commitments on intellectual property, forced technology transfer and currency markets.

The merchandise trade deficit with China shrank to a seasonally adjusted US$25.6 billion, the smallest since 2013, according to data compiled by Bloomberg. Exports to the Asian nation rose by US$1.4 billion, the most since February, while imports declined for a sixth straight month, reflecting the toll of more than a year of tariffs.

President Donald Trump has said he’ll sign the trade deal in Washington Jan. 15. A Chinese delegation, led by its top trade negotiator, Vice Premier Liu He, will travel to the U.S. capital to sign it, according to people familiar with the matter, Bloomberg reported this week.

The U.S. typically runs a services surplus and merchandise deficit, a shortfall that Trump has assailed as unfair.

Even as a shrinking deficit provides a possible talking point for Trump, overall U.S. trade with China has fallen sharply in 2019, dropping the Asian nation to third place among trading partners, behind Mexico and Canada.

In the first 11 months of last year, merchandise imports from China were down 15 per cent and exports to the country dropped 11.4 per cent. The U.S. goods deficit with China narrowed to a seasonally adjusted $319.8 billion from the same 11 months of 2018, the report showed.

In nominal terms, the petroleum surplus edged up to a record $832 million, further boosting America’s new status as a net exporter. Price-adjusted imports of petroleum were US$27.2 billion, the lowest in data back to 1994.