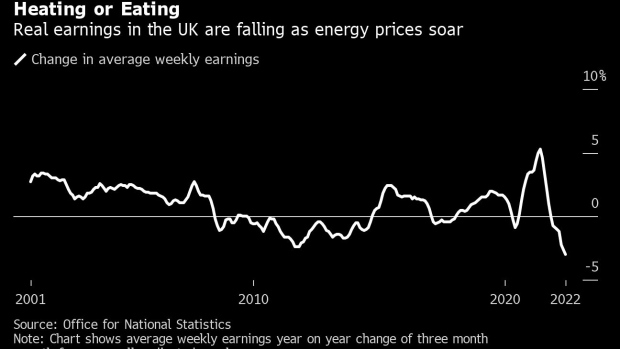 An electricity transmission pylon above residential houses in Brighton, U.K., on Thursday, Nov. 12, 2020. Brexit talks are going down to the wire, and the European Union's chief negotiator Michel Barnier is threatening British access to the continent's single energy market as a way of extracting concessions on fishing rights. , Bloomberg

(Bloomberg) -- More than half of UK households risk being pushed into energy poverty this winter by soaring bills that threaten suppliers with rising amounts of debt that simply can’t be repaid.

The crisis could have a bigger impact on households than the 2008 financial crisis, according to consultancy Baringa Partners. The bleak warning comes as bills are set to surge roughly 80% from October, just as the arrival of colder weather boosts energy demand.

Winter energy bills are expected to be more than triple what they were a year ago. That will further stretch consumer budgets being hit by a wider cost-of-living crisis that’s stoking fears of a recession and prompting calls for the government to offer more help.

“The impact to society will be higher than the 2008 crash in terms of the impact on households,” said James Cooper, a partner at Baringa. “We’re now moving into territory where a majority of households are placed into debt or a very fragile financial position.”

Average annual energy bills are forecast to exceed £3,500 ($4,140) from Oct. 1, when a new price cap kicks in. That’s more than 11% of a household’s median disposable income, according to the Office of National Statistics.

Energy costs could eventually drain as much as 17% of household income next year if the government doesn’t give more help, based on price-cap estimates from Cornwall Insight Ltd.

Customer debt is already on the rise. In the summer, people usually pay down debt built up during winter, when they use more energy. But debts actually increased this summer as energy prices hit records. The situation could get much worse as bills jump in the colder months.

The Don’t Pay UK campaign has drawn over 110,000 signatures from people vowing not to pay their energy bills in protest. Even those who follow through on the threat may only amount to a small fraction of those who can’t afford to pay, particularly if the winter is severe.

Tackling the crisis is a major challenge for the next prime minister, with little chance of new policy until either Liz Truss or Rishi Sunak takes office. The energy industry has urged the government to provide more help, beyond the £400 support pledged for each home.

“The big concern we have at the moment is customers’ inability to afford bill rises,” said Dan Alchin, director of regulation at lobby Energy UK. “There’s a need for government to urgently act on that.”

Helping households by freezing the price cap at the current level for two years would require about £100 billion, according to Keith Anderson, chief executive officer of Scottish Power Ltd., one of the UK’s biggest residential suppliers. Centrica Plc’s British Gas unit will offer grants to some customers to offset their energy debt.

Customers who don’t pay can be put on a repayment meter or even cut off -- a lengthy process because suppliers are required to make big efforts to help people pay what they owe. Some companies simply might not be able to cope with the level of bad debt, leading to them going out of business.

That risk will increase as the price cap rises further next year. There’s a provision in the way regulator Ofgem calculates the cap to support suppliers dealing with bad debt, which could lead to a higher cap and therefore potentially more household debt down the line.

“There’s a risk people can’t pay or won’t pay and that number could grow quite quickly,” RBC Europe Ltd. analyst John Musk said. “That could have a cascading effect on smaller suppliers that are less well capitalized and they could start going under.”