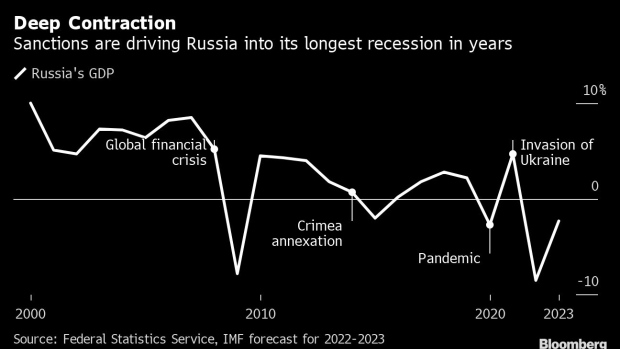 The United Nations secretary-general will have meetings with both President Volodymyr Zelenskiy of Ukraine and Russian President Vladimir Putin next week as the world body seeks urgent steps toward peace.

Indonesia is set to ban exports of cooking oil in the face of a local shortage, adding to shortages that have followed Russia’s invasion of Ukraine -- a key supplier of sunflower oil.

The BBC reported Friday that some U.K. supermarkets are limiting how much cooking oil customers can buy as supplies run short.

The war on Ukraine was just the start, President Volodymyr Zelenskiy said late Friday after comments by a Russian commander that Moscow wants control of all of southern Ukraine.

“This only confirms what I have said many times: the Russian invasion of Ukraine was intended only as a beginning, then they want to capture other countries,” Zelenskiy said in his nightly video address. “Who is next?”

On Friday, a Russian general said the Kremlin aims to secure control of the entire south of Ukraine, create a land bridge to Transnistria, a pro-Russian region of Moldova, and assume control of key Black Sea ports.

“Despite their stated conquest of Mariupol, heavy fighting continues to take place, frustrating Russian attempts to capture the city, thus further slowing their desired progress in the Donbas,” the U.K. defense ministry said in an intelligence update.

Russian troops “have made no major gains” in the east over the past day in the face of Ukrainian counter-attacks and effective air and sea defence, the U.K. said.

Ukraine said Friday that Russia had moved a dozen military units to eastern Ukraine from around Mariupol.

United Nations Secretary-General Antonio Guterres plans to meet with Zelenskiy in Ukraine next week, the UN announced on Friday. He was already scheduled to go to Moscow to see Putin and Russia’s foreign minister, Sergei Lavrov. On the trip, Guterres and staff members plan to discuss stepping up humanitarian assistance to Ukrainians affected by the war, the UN said.

Russia’s Defense Ministry said one sailor died and 27 people remain missing after last week’s sinking of the Moskva, the flagship of its Black Sea fleet. Russia says the ship sank in a storm while it was being towed back to port after fires broke out on board.

Ukraine’s military says the ship, whose normal crew was thought to be close to 500, sunk after being hit by Neptune missiles. The U.S. has backed Ukraine’s account.

Oliver Hughes and Pavel Fedorov, the former co-chief executive officers of TCS Group Holding Plc, are currently fundraising with venture capital firms and sovereign wealth funds, with the aim of closing the round by June, Fedorov said from Abu Dhabi.

The U.K.’s ministry of defense said it is “exploring sending British Challenger 2 tanks” to Poland, to help “bridge the gap between Poland donating tanks to Ukraine and replacements arriving.”

UN Secretary-General Antonio Guterres will “be received by” Putin in Moscow on April 26 and will have a working lunch with Foreign Minister Sergei Lavrov, according to statements from the UN and the Kremlin.

Guterres earlier this week asked for separate meetings with Putin and Zelenskiy to discuss “urgent steps” for peace.

The president of the European Council, Charles Michel, told Russian President Putin what an EU official called some brutal truths about the war in Ukraine during a call Friday. Michel, who chairs EU summits, believes Putin’s entourage doesn’t brief him fully about events, according to the official, who was granted anonymity to discuss confidential talks.

Michel told Putin that the Russian leader had been wrong about his expectations that the war would last 48 hours, divide EU members and fail to trigger heavy economic sanctions. According to the Kremlin’s readout, Putin reiterated Moscow’s public line, criticizing what it called “irresponsible statements of EU officials on the need to resolve the situation in Ukraine militarily” and the bloc’s “ignoring of numerous war crimes by Ukrainian forces.”

Estonia Wards Off Cyber-Attacks With Links to Russian Hackers (5:23 p.m.)

Estonia has fended off a wave of cyber-attacks believed to be launched by a pro-Kremlin hacker group targeting Ukraine supporters. Around 700 million denial-of-service attacks mainly from outside of Europe were launched against the websites of the Estonian president, foreign ministry, police and public services agencies on Thursday and Friday, the Estonian Computer Emergency Response Team said.

The impact has so far been minimal, the authority said. The website of a NATO cybersecurity center in Estonia, which this week hosted a global exercise with 2,000 participants from 32 countries, was among the websites that were temporarily down. The pro-Kremlin hacker group Killnet has claimed to be behind the attacks, a military spokeswoman said on Friday.

Halliburton Co. said that sanctions imposed by the U.S., the EU and other nations require the company to wind down certain contracts in Russia by May 15.

The company also said that the total net book value of its assets in Russia is about $340 million, and warned the invasion of Ukraine and related sanctions could cause the company to take a charge related to those assets.

The European Union has suggested that companies could keep paying for gas in euros, as it published guidance that Moscow’s decree calling for payment in rubles would violate sanctions.

The commission confirmed a preliminary assessment that the decree would run against European sanctions imposed on Russia. It also said the decree doesn’t automatically preclude allowing companies to continue paying in euros, and the scope for exemptions is not yet clear. The commission advised companies to seek confirmation from Moscow that this was possible.

Officials representing the U.S., Germany, Japan, and other nations walked out of a joint World Bank-International Monetary Fund gathering on Friday when Russia’s envoy started speaking, the second such action at a high-profile gathering in Washington this week, people familiar with the situation said.

The representatives were attending a meeting of the institution’s development committee, according to the people, who declined to be identified because the gathering is private. The committee is a ministerial-level forum of the World Bank and the IMF for intergovernmental consensus-building on development issues and has 25 members, usually ministers of finance or development, according to its website.

Russia faces a deep and prolonged economic contraction along with higher inflation and reduced living standards, as sanctions imposed by the U.S. and its allies sap it of vital products and technology, according to economists at the central bank.

In its most detailed public statement on the outlook since the war started, the Bank of Russia warned that “the depth of the contraction may be quite significant and exit trajectory drawn out in time” because the supply shocks triggered by sanctions are unlikely to fade quickly. It said Russia would experience “reverse industrialization” as sanctions forced it to seek lower-tech replacements for western goods that were cut off.

A top general said the Kremlin aims to secure control of the entire south of Ukraine as well as the eastern Donbas region, Russia’s state-run Tass and RIA Novosti reported.

Russia wants to create a land bridge to Crimea as well to influence key aspects of Ukraine’s economy, including major Black Sea ports, he said. Ultimately the Kremlin wants access to Moldova’s pro-Russian breakaway region of Transnistria, which lies to the northwest of Odesa.