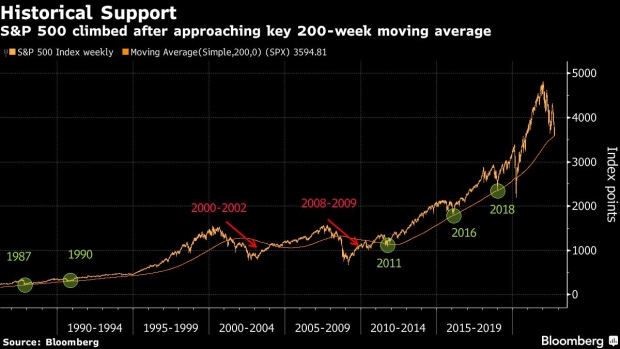 (Bloomberg) -- The two-day rally in US stocks that was halted on Wednesday has triggered a bullish signal that could lift the S&P 500 by at least 3% from its last close over the coming weeks, according to a Bank of America Corp. strategist.

The “immediate pattern” for the S&P 500 is now bullish with upside potential to between 3,900 and 3,946 points, which serves as key resistance levels for the benchmark index moving forward, according to Stephen Suttmeier, a technical research strategist at the bank. That implies a 3% to 4% rise above Tuesday’s close, the strategist said.

More than 90% of stocks on the New York Stock Exchange rose for two days in a row on Monday and Tuesday, with trading volume equally positive, said Suttmeier. That followed one such day on Sept. 28, he wrote in a note, adding that three occurrences in five sessions is a bullish sign.

After slumping 25% in the first nine months of the year, the S&P 500 kicked off October with its biggest two-day rally since April 2020 on optimism that signs of slowing economic growth could prompt the Federal Reserve to turn less hawkish on policy. But with data released on Wednesday showing continued strength in the economy, those bets have been pared back, sparking another slide in the benchmark index.

Still, Suttmeier said the S&P 500 bouncing off its 200-week moving average -- historically a level of support -- was a positive signal.