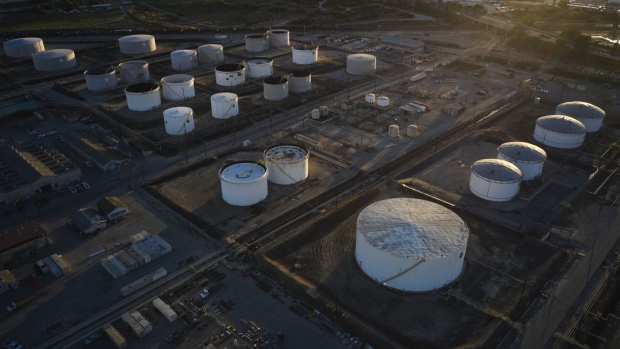 The Torrance Refining Co. in Torrance, California, U.S., on Monday, Feb. 28, 2022. The U.S. and its allies are discussing a coordinated release of about 60 million barrels of oil from their emergency stockpiles after Russia’s invasion of Ukraine pushed crude prices above $100. , Bloomberg

(Bloomberg) -- Congressional Democrats advanced a plan that would allow the US government to manage its emergency oil stockpile like a financial tool and use the profits to fund electric vehicle infrastructure.

Dubbed the “Buy Low and Sell High Act,” the legislation introduced Monday would give the government more freedom to make sales and purchases for the purpose of maximizing economic benefit. Up to 350 million barrels of the strategic petroleum reserve -- nearly half its current physical capacity -- would be earmarked for swift transactions and designated a new “Economic Petroleum Reserve.”

If enacted, the proposal would mark a major shift in the US approach toward emergency crude supplies, which were formally established in the 1970s after the Arab oil embargo as a tool for addressing severe energy supply disruptions. President Joe Biden has unleashed tens of millions of barrels of SPR crude in an effort to tame high prices stoked by Russia’s invasion of Ukraine. Some critics decried the move as a misuse of the reserve.

The bill “helps us regain control of domestic gas prices and protects drivers from future price fluctuations,” Representative Frank Pallone Jr., a Democrat from New Jersey, said in an emailed statement. Pallone introduced the legislation along with eight other Democrats on Monday. An Energy Department spokesperson did not immediately comment on the measure.

The measure would give the Energy Department the power to purchase oil for the economic reserve when prices dip below $60 a barrel and sell when prices climb above $90. Proceeds would be steered to electric vehicle initiatives and a new technical assistance program designed to increase crude throughput at foreign allies’ refineries.

It also contains provisions that would dramatically expand government stockpiles of fuels by building a network of refined petroleum product reserves across the US with the capacity to store 250 million barrels of domestically refined gasoline and diesel. At the same time, the Northeast Home Heating Oil Reserve would quadruple in size to store up to 4 million barrels of petroleum distillate.

The legislation would prohibit barrels from the reserves, both crude and refined products, to be exported to companies owned or influenced by China or nations under US sanctions.