Voisey’s Bay mine extended by 15 years

The world’s biggest nickel producer is making an almost US$2 billion bet that the metal has a bright future amid surging demand for battery commodities.

With the Voisey’s Bay nickel complex in Canada getting toward the end of its open-pit life, Vale SA is moving ahead with a transition to underground operations, Newfoundland and Labrador Premier Dwight Ball said in a ceremony on Monday attended by Eduardo Bartolomeo, Vale’s head of base metals.

The investment is expected to add at least 15 years to the mine and create 1,700 direct jobs, according to Ball. With construction set to kick off this summer, underground operations should begin in April 2021, he said.

The future of Vale’s nickel operations appeared uncertain when Chief Executive Officer Fabio Schvartsman took over and ordered a review. But as the demand outlook for metals such as nickel and cobalt brightened along with a nascent electric-car boom, the Rio de Janeiro-based miner took a wait-and-see approach. Today’s announcement is a clear sign Vale’s is positive on nickel again.

Schvartsman has been looking at financing alternatives for the project at Voisey’s Bay, which also produces cobalt. A so-called streaming arrangement -- in which an investor provides upfront funding to miners in exchange for a share of their future output -- was one option.

On Friday, people familiar with the talks said Vale had reached a US$700 million deal to sell cobalt from Voisey’s Bay. Financing wasn’t discussed in Monday’s announcement. 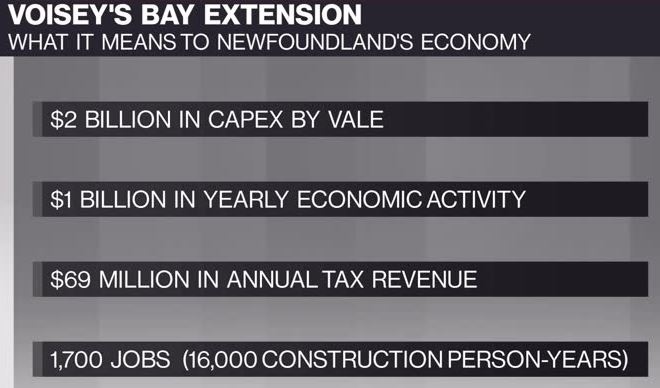