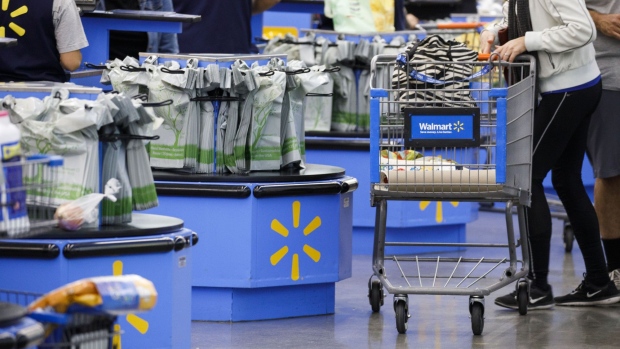 A customer pushes a shopping cart after at a Walmart Inc. store in Burbank, California, U.S., on Monday, Nov. 19, 2018. To get the jump on Black Friday selling, retailers are launching Black Friday-like promotions in the weeks prior to the event since competition and price transparency are forcing retailers to grab as much share of the consumers' wallet as they can. Photographer: Bloomberg/Bloomberg , Photographer: Bloomberg/Bloomberg

(Bloomberg) -- Target Corp. struck out over the holidays, but the two biggest kids on the retail block have yet to come to the plate.

Amazon.com Inc. and Walmart Inc., the dominant players by far in store-based and internet retailing in the U.S., will disclose their full fourth-quarter results on Jan. 30 and Feb. 18, respectively. While Amazon said Dec. 26 that it had a “record breaking” holiday season, it didn’t provide specifics.

This leaves analysts and investors with a few weeks to ponder whether the lackluster holiday sales at Target -- an industry bellwether -- tell a broader, more troubling, story about the American consumer, or if they’re just a pothole on the company’s turnaround trail.

“It’s hard to know at this point,” Brian Yarbrough, an analyst at Edwards Jones & Co., said by phone. “We will see what Walmart and Amazon say.”

There’s plenty of evidence that the road gets tougher from here, and not just for Target, which suffered a slowdown across the board, from t-shirts to toys to televisions. Sales of key gift categories rose just 0.2% in November and December, data tracker NPD found, well below forecasts.

Cautious consumers didn’t buy as many big-ticket electronics items on Black Friday, the annual shopping frenzy, and the shopping they did do increasingly came online. But e-commerce growth of 19% at Target was its worst online performance in years.

Walmart and Amazon, meanwhile, both rolled out next-day free shipping on a host of items well before the holidays, positioning themselves to grab market share in e-commerce, where battles are won as much on convenience as on prices.

The two companies control a disproportionate amount of the U.S. retail landscape. Walmart garners more than 20 cents of every dollar spent on food, according to Morgan Stanley, while Amazon is the biggest seller of apparel and gobbles up more than 25% of all incremental retail spending, according to Wells Fargo estimates.

The next signal comes Thursday, when the Commerce Department will release December retail sales data. But to get the full picture, investors will have to wait for the twin titans of retail weigh in.

To contact the reporter on this story: Matthew Boyle in New York at mboyle20@bloomberg.net

To contact the editors responsible for this story: Crayton Harrison at tharrison5@bloomberg.net, Jonathan Roeder, Sally Bakewell