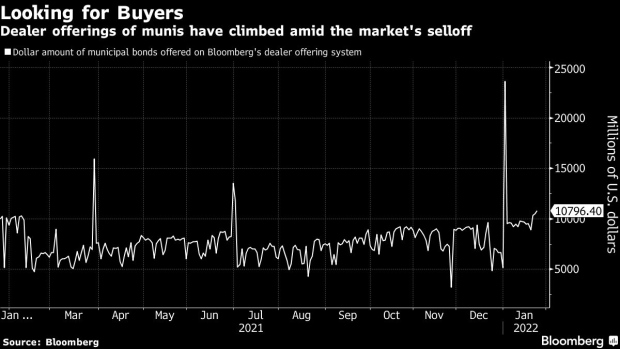 Travelers walk through Ronald Reagan National Airport (DCA) in Washington, D.C., U.S., on Wednesday, Nov. 21, 2018. The trade association Airlines for America has projected that a record 30.6 million passengers will travel on U.S. airlines during the 12-day Thanksgiving air travel period, up 5.7 percent from an estimated 29 million passengers during the 2017 travel period. , Bloomberg

(Bloomberg) -- Municipal bonds are no longer flying off the shelves, marking a major departure for the asset class as it’s poised for the biggest monthly loss since the height of the pandemic-fueled market chaos in early 2020.

Investors are balking across the bond market as they brace for Federal Reserve rate hikes as soon as March. For municipal issuers, it’s an abrupt shift from the rabid demand seen last year. Large, highly rated borrowers are finding it harder to price debt at initially offered yields, and some deals have had to cheapen, said Brad Libby, portfolio manager of the $2.1 billion Hartford Municipal Opportunities Fund.

“They have certainly struggled in the first couple of weeks of the year,” he said. Higher-rated deals may be struggling more because that part of the market is relatively expensive, Libby said.

Muni issuers had the upper hand for most of last year as investors poured in cash, in part as lawmakers in Washington debated raising taxes on the wealthy. Now angst over the prospect of tighter monetary policy and elevated inflation have taken hold. The muni market has lost 1.7% in January, on pace for the steepest monthly losses since March 2020, Bloomberg index data show.

For the first time in 10 months, investors have pulled cash out of muni mutual funds, according to Refinitiv Lipper US Fund Flows data for the week ended Jan. 19. Offerings posted on Bloomberg’s dealer offering system rose to $10.8 billion on Tuesday, compared with a one-year average of about $8 billion.

The weakness in the primary market is unusual, though it’s not as severe as seen in March 2020, when deals were scuttled entirely.

Last week, the Metropolitan Washington Airports Authority had to offer a second order period as part of a toll-road bond sale, according to two people familiar with the matter who requested anonymity because discussions around the deal were private. That’s a rarity for a market that became accustomed to deals being oversubscribed.

Meanwhile, the New York City Transitional Finance Authority saw soft demand on a sale last week. Some debt was unsold at the end of the order period and yields on some maturities were increased from 1 to 3 basis points, according to a person familiar with the deal who asked not to be named because discussions around the deal were private.

JPMorgan Chase & Co., senior manager on the deal, had to step in to buy about $46.7 million of the $950 million tax-exempt portion, most of which has been sold since, the person said.

“If there’s enough people sitting on the sidelines, deals are just going to have to get cheaper,” he said.

Nuveen noted the market weakness in a report this week, pointing to a AAA rated sale last week by a Virginia state agency on behalf of Chesterfield County. Bonds that priced to yield 0.66% in 2025 have since traded as high as 0.87%, data compiled by Bloomberg show.

A sense of ambivalence has entered investors’ minds, said Vikram Rai, head of the municipal strategy group at Citigroup Inc.

“On the one hand, yes it’s cheaper,” he said. “On the other hand, could it get even cheaper? They’ll invest some now and wait for better buying opportunities. The conflict is justified.”