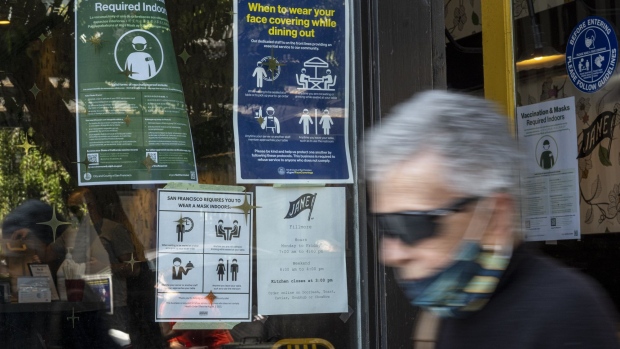 Covid-19 information signs in the window of a restaurant as proof of vaccination requirements are in effect in San Francisco, California, U.S., on Wednesday, Aug. 25, 2021. San Francisco has become the first major city in the United States to require proof of full vaccination against Covid-19 for a variety of high-risk indoor activities that involve eating, drinking or exercising. Photographer: David Paul Morris/Bloomberg , Bloomberg

(Bloomberg) -- Markets are on tenterhooks for critical U.S. inflation data that could buffet stocks and bonds if they shift expectations about Federal Reserve stimulus withdrawal and the timing of interest-rate hikes.

A backdrop of slower reopening in pandemic-stricken economies due to the delta strain, and price pressures stoked by supply snarls led to declines in both global stocks and Treasuries last week.

Some measures of producer prices released Friday topped expectations, with a gauge of final demand jumping 8.3% year-over-year amid persistent disruptions in supply.

That’s coming against a backdrop of tenacious inflation concerns, with central banks pumping in stimulus, and inventory issues cropping up just as the labor market adjusts to a new reality of work. Here’s what some strategists and investors are saying now.

Inflation is far stickier than anybody would’ve anticipated maybe six months ago. We do think that inflation is going to head lower into the end of the year. What is quite clear though is that the pace of the slowdown in inflation in the second half of the year will remain very, very slow. Even in the likes of the euro zone, in the U.K., elsewhere, inflation is very high. That will add an element of uncertainty with respect to ‘can central banks bring forward monetary policy normalization?’ Unlikely, but it’s going to be there and it’s going to impact on market sentiment in the short term.

Miller Tabak chief market strategist Matt Maley sees a 10-year Treasury yield of 1.4% as pivotal, versus its current level of around 1.33%:

Look at the bond market. We had the above-mentioned weaker-than-expected numbers over the past two weeks (led by the weaker-than-expected employment report), and yet the yield on the U.S. 10-year note has risen from 1.26% to 1.33% over those two weeks.We still think that the yield on the 10-year note has to rise above the August highs of 1.37% -- and likely above 1.4% -- to confirm the breakout, but if/when that takes place, it’s going to also confirm a change in the multi-month trend in bond yields to the upside. If that continues to take place at a time when the data is not strong (and Wall Street firms keep cutting projections), it’s going to be an even clearer signal that stagflation is indeed going to be a problem going forward.

Stocks and bonds have been highly correlated for the better part of the past six months -- a departure from the risk-on/risk-off dynamic that markets have become accustomed to over the past two decades, but consistent with the relationship in periods of trending inflation.

This correlation has been benevolent with both moving to the upside, but what happens if momentum shifts, as was seemingly the case in last Friday’s trading session? At any rate, stocks and bonds moving together does complicate risk management in the traditional portfolio context.

Wells Fargo Asset Management’s Brian Jacobsen said in an interview on Bloomberg Television that the firm likes short-term high-yield plays in the U.S., as well as emerging markets:

When we look at some of the activity as far as the breakevens, it looks like investors may be beyond peak inflation fears. Sadly, that has coincided with a time in which we may be past peak growth optimism. You have those two things working against each other a little bit, causing volatility that we saw this past week with the U.S. equity markets.

It will not be a smooth path, but we expect that maybe next year at this time we will be much closer to the Fed’s target than we are now.

RBC derivatives strategist Amy Wu Silverman is looking at the difference in inflation expectations on exchange-traded funds for the industrials and consumer staples sectors. On the latter:

Essentially, it appears the option market’s inflationary concerns for consumer staples appear short-lived but suggest they will be persistent for industrials.