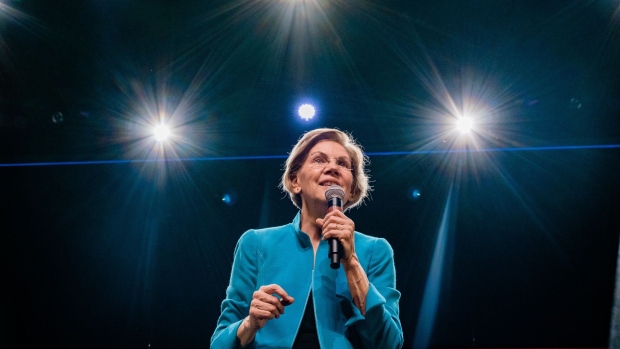 U.S. senators including Elizabeth Warren, the onetime presidential candidate, are pushing for details from Deutsche Bank AG about contacts with the family business of President Donald Trump, which has asked the German lender for leniency on some of its loans.

Contact between the lender and the Trump Organization raises “troubling new concerns about the extent to which Deutsche Bank holds financial leverage over the president,” and whether administration officials would offer “regulatory favors” as enticement, the senators wrote in a letter released by Warren’s office.

Trump Organization representatives reached out to Deutsche Bank’s private-banking unit in New York late last month as the coronavirus pandemic forces widespread disruptions to the economy, according to a person familiar with the matter. The talks are ongoing, the New York Times has reported.

“The American public has a right to know if Deutsche Bank is providing special financial favors to the president or his family’s company so that they can determine if these favors are affecting Trump administration policy as it relates to Deutsche Bank,” the senators wrote. Signing the letter with Warren were senators Richard Blumenthal, Sherrod Brown and Chris Van Hollen, all Democrats.

They asked the bank to provide details of contacts between the firm and the Trump Organization, including dates, who was involved and what was discussed. The lawmakers requested the same information regarding Kushner Cos., the real estate enterprise run by the Trump’s son-in-law, Jared Kushner, who’s also a senior adviser to the president.

Emailed requests for comment to the Trump Organization and Kushner Cos. weren’t immediately returned. Troy Gravitt, a Deutsche Bank spokesman, declined to comment.

“Favor-seeking from the Trump Organization in the midst of the economic collapse raises the questions of whether Deutsche Bank may treat the Trump Organization more favorably than other similarly situated companies, and whether President Trump or other administration officials may be inclined to either provide regulatory favors to Deutsche Bank in exchange for this beneficence or punish Deutsche Bank if it chooses not to engage in financial favoritism,” the senators wrote.

The lawmakers asked specifically if any changes to loan deals were discussed or agreed upon and how those deals compare to offers the bank is making to other companies. And they want to know if anyone from the firm had contact with Trump or anyone in the executive branch about “any legislative, regulatory, or enforcement matter relating to Deutsche Bank.”

Deutsche Bank’s loans to Trump have included money for a Florida golf resort, a hotel in Washington, D.C., and a Chicago tower. The firm’s leaders in late 2016 were so concerned about the potential public-relations impact if the Trump Organization were to default that they discussed extending repayment dates until after the end of a potential second term in 2025. They decided against the idea, choosing not to engage in new business with Trump while he’s in office.

The loans, negotiated between 2012 and 2015, include a personal guarantee from Trump. That would put the German lender in the position of potentially having to collect from a sitting president in case of a default.